Traveling from Italy to Greece 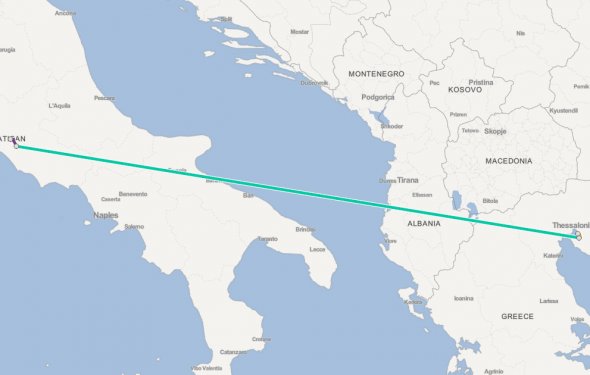 My wife and I took off for a varied European vacation. We flew from TEL AVIV to MILAN. Our initial destination was VENICE where we had booked a hotel on the Grand Canal. You can fly from Milan to Venice but we decided to take the train. That involved taking the bus shuttle from Malpensa Airport to Milan's central station. It is possible to take a train from the airport to the Central Station but let me assure you it is quicker, cheaper, and more convenient to take the bus shuttle for anyone going out of Central Station to other locations.

The train journey from MILAN to VENICE is comfortable and delightful. The cost was 50.50 Euros. They serve cheap snacks and drinks on the slightly more than two hour journey to the SANTA LUCIA train station in VENICE.

What a romantic station! You feel as if you are in a movie when you step outside this grand station onto the banks of the GRAND CANAL. You are immediately transported to another world. It is an experience not to be missed.

Our major problem was getting four heavy suitcases and an assortment of bags across the canal. I bravely volunteered to schlepp this baggage in a relay over the Ponte de Scalzi bridge to the other side where our modest hotel was located. Why do the authorities in Venice refuse to ramp part of their thousands of bridges so that wheelchairs, suitcases, and tarde products can, more easily negotiate the numerous canals in the city? We were part of the perenial tourist struggle of transporting body, soul, and luggage to hotels where wheeled vehicles cannot reach, and where the water bus is not a solution.

My wife refused my offer and immediately accepted the first offer of a boat across the canal. I must not have been concentrating because I silently accepted their 25 Euro charge. Imagine our surprise when we discovered that our hotel was directly across from the train station. It must have taken no more than three minutes to cross the canal and deliver us to the door of our hotel.

The Canal Hotel is an old, modest hotel pretending to be a three star. We had asked for a Canal view way in advance of our arrival but were told that they were all taken. Instead we received a small clean room with no view worth mentioning. Breakfast is served in a simple garden under the shade of dusty trees. Breakfast was straight forward continental with limited selection. The location of the Canal Hotel was its saving grace being right on the banks of the Grand Canal.

We would advise anyone staying in Venice for more than two days to take the 72 hour pass for the water buses.

It is possible to write pages about the splendour and character of Venice. On a personal level, we found the San Polo/Dorso Doro side of the canal far more appealing than the heaving passageways between San Marco and the rialto Bridge. There is something about the area of ACCADEMIA that attracts a different type of Venetian. It is also relatively free of tourists which allows one to wander without being jostled. The shops tend to be galleries with less tourist tatt than the well-trodden lanes on the other bank of the Grand Canal. The charm of Venice can be enjoyed in peace and calm, a feature we only found when we escaped into the Jewish Ghetto when manouvering clear of the heaving mass by the Rio San Marcuola. We enjoyed one of our finest non-Italian meals in the kosher Garden Restaurant on the square in the Ghetto. You do not have to be Jewish to enjoy good food here. Start with the goulash which is served as a meat and bean soup. Continue with the chicken, and finish off with the lochshen pudding - a type of bread pudding.

After several romantic days and nights in Venice we made our way to the cruise terminal as we had booked an Eastern Mediterranean sail aboard the Oosterdam, one of Holland America's fine ships.

If you have not tried cruising try the Mediterranean itinerary. There is no finer way to deliver you and your luggage from country to country in style than experiencing one of the major cruiselines that know how to give service.

Try sailing out of Venice with a glass of champagne in your hand and your arm around the one you love on your balcony as you majestically cruise passed the Grand Canal and St. Mark's Square as you set out on a journey to foreign ports.

In our case we woke up the next morning in SPLIT, Croatia. This town is impressive in its harmonious combination of ancient and modern. The charm of the historic old town was enhanced by groups of excellent singers giving their interpretations of Croatian folk songs. The port promenade is new, wide, and inviting with its pleasant cafes and shops.

Pershing 52 on delivery from Italy to Greece

How to Book Train Travel From Italy to Greece

John William De Forest (May 31, 1826 – July 17, 1906) was an American soldier and writer of realistic fiction, best known for his Civil War novel Miss Ravenel's Conversion from Secession to Loyalty.
De Forest was born in Seymour, Connecticut, (then called Humphreysville), the son of a prosperous cotton manufacturer. He did not attend college...

Carl Friedrich Heinrich Werner (October 4, 1808 – January 10, 1894) was a German watercolor painter.
Born in Weimar, Werner studied painting under Julius Schnorr von Carolsfeld in Leipzig. He switched to studying architecture in Munich from 1829 to 1831, but thereafter returned to painting. He won a scholarship to travel to Italy, where he...