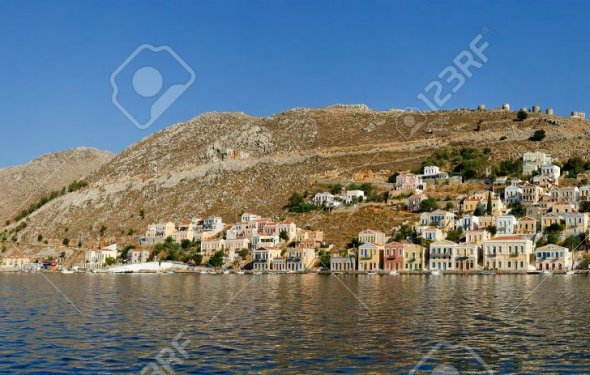 Loyalty to Sparta ended in 395 BCE when democracy was established on the island. Briefly a member of the Second Athenian Confederacy in c. 378 BCE, the island became subject to the Carian satrap Mausolus who stationed a garrison on the island in 357 BCE. The next foreign power to impose itself was Alexander the Great, who established a Macedonian garrison on the island; however, under his successors Rhodes enjoyed another period of prosperity due to its five harbours and position near the newly established cities of the eastern Mediterranean. Demetrius I attempted to take the island in c. 305 BCE but was ultimately unsuccessful after a year-long siege. The entrepreneurial Rhodians sold Demetrius’ siege equipment and used the proceeds to build a massive 32 metre high bronze statue of their patron god Helios - the Colossus of Rhodes and one of the Seven Wonders of the Ancient World. The statue, sculpted by Chares, a native of the island from Lindus, stood at the harbour entrance but was unfortunately toppled by an earthquake in 228 or 226 BCE.

The island remained independent and cultivated trade links, in particular, with the Ptolemies of Egypt. In addition, the naval fleet of Rhodes took on the important role of policing the Aegean against piracy, a problem of particular concern as islands such as Carpathos and Nisyros and the Peraea (an area of the eastern mainland) were now under the control of Rhodes.

Rhodes became an ally of Rome in the wars against Phillip V and Antiochus III and received as thanks territory in Caria and Lycia. However, not all Rhodians supported friendly relations with Rome and the alliance was not always a peaceful one. Things took a turn for the worse when Rhodes’ dominant trade position was compromised by the Roman decision to make Delos, in the Cyclades, a free port in 167 BCE. Besieged by Mithradates VI in 88 BCE and sacked by Cassius Longinus in 43 BCE, the role of Rhodes as a major political force came to an end. However, the island did still enjoy a certain economic prosperity and it continued to hold a reputation as an important cultural centre, notably in sculpture and philosophy (especially the Stoics). Cicero also studied on Rhodes, continuing the island’s literary tradition begun by one of its most famous sons, the writer and poet, Apollonius Rhodius.

Rhodes town, although extensively built upon in later periods, still shows the remains of temples, city walls, a stadium, odeum, and harbour constructions. Camirus never had a fortified acropolis; nevertheless, excavations have revealed a temple to Athena, stoas, an agora, and extensive private housing remains. Ialysus displays Mycenaean tombs, temples to Athena Polias and Zeus Polieus, and a fountain house.
Perhaps the most important archaeological site on the island is at Lindus, the capital before it was moved to Rhodes c. 408 BCE. A temple to Athena Lindia was built on the acropolis of the town, according to tradition, by Danaos in 1510 BCE. This was replaced with a new Doric temple in the 6th century BCE in the reign of the tyrant Cleoboulos. After this temple was destroyed by fire, another temple was rebuilt in 342 BCE. A large propylon or gate and a monumental stairway were added to the sacred site c. 300 BCE. In the 2nd century BCE a Hellenistic stoa was constructed. Also of interest are the remains of the theatre which originally had 26 rows of seats and a capacity for some 18, 000 spectators, a temple to Dionysos, and rock-cut tombs. All of these monuments are testimony to the wealth and prestige once enjoyed by the island from its role as a trade hub in the eastern Mediterranean..

Mark holds an M.A. in Greek philosophy and his special interests include the Minoans, the ancient Americas, and world mythology. He loves visiting and reading about historic sites and transforming that experience into free articles accessible to all.

Scenes from the island of Rhodes, Greece.wmv
Related Posts
Categories
Latest Stories
Average weather in Athens Greece Weather lowdown Although summer in Athens began in June, on average the...
Greece and Turkey Travel Travel on a Rick Steves tour through Greece or Turkey for the very best...
Hotels Resorts in Greece This stunning beach resort is situated in Crete on the Cretan sea. It is...
Island of Rhodes, Greece Loyalty to Sparta ended in 395 BCE when democracy was established on the...
Greece Ridge Center Mall Avis Location Information » 317 Greece Ridge Center Drive Location Contact...
Links How deep is eardrum q tips Why do the tips of my breasts hurt How to clean...
Interesting facts

Rhodes (Greek: Ρόδος, Ródos, [ˈroðos]) is an island in Greece, located in the eastern Aegean Sea. It is the largest of the Dodecanese islands in terms of both land area and population, with a population of 117,007, and also the island group's historical capital. Administratively the island forms a separate municipality within the Rhodes...