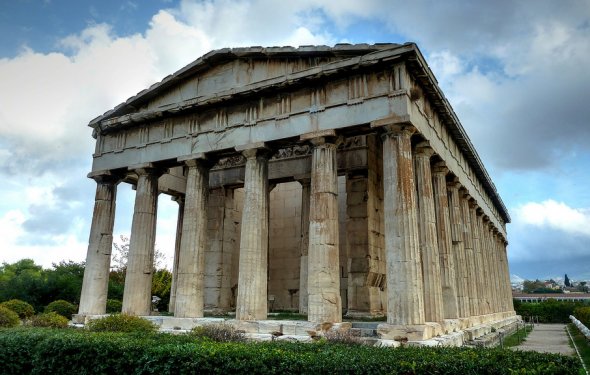 Located at the southernmost tip of the Attica peninsula in Greece, the Temple of Poseidon at Sounion is surrounded on three sides by the sea. It was constructed in approx. 440 BC, over the ruins of a temple dating from the Archaic Period. Only some columns of the Temple of Poseidon stand today, but intact it would have closely resembled the Temple of Hephaestus beneath the Acropolis, which may have been designed by the same architect.

8Temple of Zeus at Cyrene

Cyrene was the most important of the five Greek colonies in present-day Libya. High up from the rest of the city, lies the Temple of Zeus, dating back to the 5th century BC. It was destroyed during a Jewish rebellion in 115 AD, and was restored 5 years later by the Romans on order of Emperor Hadrian. In 365 AD an earthquake reduced the temple to rubble once more and it was not rebuilt until modern times by British and Italian archaeologists. This temple is larger than the Parthenon, a reflection of the wealth and importance of Cyrene in the ancient Greek world.

The Erechtheum is an ancient Greek temple of Ionic style on the north side of the Acropolis of Athens. The temple as seen today was built between 421 and 407 BC. The name, of popular origin, is derived from a shrine dedicated to the Greek hero Erichthonius. The temple is probably most famous for its distinctive porch supported by six female figures known as the Caryatids.

Located on a remote mountainside in the Peloponnese, the Temple of Apollo Epicurius at Bassae is a well-preserved and unusual Greek temple. It was built somewhere between 450 and 400 BC. The temple is aligned north-south, in contrast to the majority of Greek temples which are aligned east-west. The temple is unusual in that it has examples of all three of the classical orders used in ancient Greek architecture.

Doric columns form the peristyle while Ionic columns support the porch and Corinthian columns feature in the interior. The temple of Apollo Epicurius is presently covered in a tent in order to protect the ruins from the elements.

Located in the northwestern part of Sicily, Segesta was one of the major cities of the Elymian people, one of the three indigenous peoples of Sicily. The population of Segesta was mixed Elymian and Greek, though the Elymians soon Hellenized and took on external characteristics of Greek life. The Doric temple that lies just outside the ancient site is well preserved. It was built in the late 5th century BC and has 6×14 Doric columns. Several things suggest that the temple was never actually finished.

The Doric columns have not been fluted as they normally would have been and the temple also seems to have lacked a roof over the main chamber.

Paestum is an ancient Greco-Roman city in southern Italy, not far from the beach. The side boasts three well preserved Greek temples. The oldest temple in Paestum is the Temple of Hera, built around 550 BC by Greek colonists. The nearby temple was built about a century later and was also dedicated to Hera, the goddess of marriage and childbirth. Further away stand the Temple of Athena built in about 500 BC.

Located about 500 meters north-west of the famous Acropolis, The Temple of Hephaestus is the best-preserved Greek temple in the world, although it is far less known than its illustrious neighbor. The temple was built in the 5th century BC in a district which contained many foundries and metalwork shops. It was therefore dedicated to Hephaestos, the god of metal working. The Temple of Hephaestus was designed by Ictinus, one of the architects who also worked on the Parthenon.

The Parthenon (Greek: Παρθενών) is a temple on the Athenian Acropolis, Greece, dedicated to the Greek goddess Athena, whom the people of Athens considered their virgin patron. Its construction began in 447 BC when the Athenian Empire was at the height of its power. It was completed in 438 BC, although decoration of the Parthenon continued until...

Thiseio, also Thisseio, Thisio and Thissio (Greek: Θησείο, pronounced [θiˈsio]) is the name of a neighborhood in downtown Athens, Greece, northwest of the Acropolis, 1.5 km southwest of downtown, and 1 km southwest of city hall; its name derives from the Temple of Hephaestus, also known as Τhiseio, as it was, in earlier times, considered a...