War between Rome and Greece 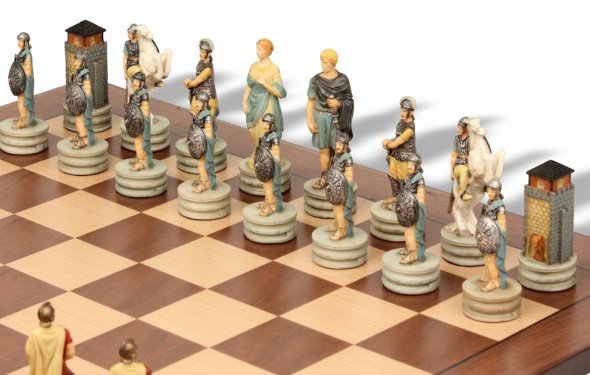 The Roman Republic was expanding, enlarging its sphere of influence along the Adriatic, so when several of the southern Greek city-states appealed to them to ward off the advances of Philip V of Macedon, they entered into the fray, commencing a series of what became known to history as the Macedonian Wars. In June of 168 BCE, the Roman general Lucius Aemilius Paullus entered into battle against Philip’s successor and son Perseus near Pydna, a city in northeastern Greece. The resulting fight would spell the end of an empire established by Philip II and his son Alexander the Great and enable Rome to secure its place as the dominant power on the Mediterranean Sea.

This final meeting between the Macedonians and Romans came after a long period of conflict beginning around 215 BCE. It would be the last opportunity to answer the question of which was better: the phalanx of Macedon or the legions of Rome. The Romans had first become involved in Greece when Hannibal Barca of Carthage, already at war with Rome in the Second Punic War (218-201 BCE), entered into an alliance with Philip V of Macedon. Fearing the consequences of this union, the Greek city-states appealed to Rome - an ally of Illyria - and together they prevented Philip from conquering the peninsula. While the alliance with Hannibal had initially proven to be a distraction to Rome, it did not deter them from the conflict in Greece. An uneasy peace was reached, bringing an end to the First Macedonian War. Unfortunately for both Rome and Greece, Philip could not stay idle for long and rekindled his desire to conquer all Greece, initiating the Second Macedonian War. In 200 BCE, he made another alliance, this time with Antiochus III, the king of the Seleucid Empire (Syria), which was a part of Alexander’s old empire.

The Battle of Pydna enabled Rome to secure its place as the dominant power on the Mediterranean Sea.

In 197 BCE the Romans proved victorious over Philip’s forces at Cynoscephalae where he lost over 13, 000 men. Philip realized he could not win against a superior army and abandoned his plans. In 194 BCE the Romans returned home, and for a short time, Greece was declared free. In 190 BCE King Antiochus, who had expanded his empire into Asia Minor and the Balkans, finally ended his fight with Rome after a disastrous defeat in the Battle of Magnesia at the hands of Scipio Africanus (the same man who had defeated Hannibal at Zama in the Second Punic War). His conquered lands were returned. Ironically, Philip, despite his earlier alliance, actually aided Rome against Antiochus. Although Rome had never entered the wars to gain land, many of the Greek city-states became obligated to Rome.

The Legion or the Phalanx?

Throughout these battles in Greece, the Romans remained confident, believing that their superior training, coupled with flexibility and speed, would bring them success. To the Romans, the victories against Philip and Antiochus were primarily due to the superiority of their army - an army that demonstrated itself to be far more adaptable than that of their enemy. These were victories of the legion over the phalanx - victories of the double-edged gladius (Roman sword) over the 18 foot sarissa (Macedonian spear).

History had long shown the strength of the phalanx, a formation that had led to the conquest of Persia decades before, and a formation advanced by Phillip II and his son Alexander. In the 4th century BCE the Macedonians possessed an army with vastly improved weaponry and over-all tactical ability that forged an empire that encompassed much of the known world, but it was also a formation dependent primarily on cohesion; it could be ineffective if otherwise. While the phalanx had proved valuable to the Macedonian army earlier, the victories at Issus and Gaugamela were in the past. The Romans had recognized one the few faults with the phalanx: it was vulnerable to both flank and rear attacks. This fault would eventually bring about the defeat of the Macedonians and their supremacy over Greece.

What are the differences between slavery in ancient Rome and Greece

The Romans freed their slaves after a period of time. They could then become Roman citizens because any fee man who established permanent residence there could become a citizen. When Rome became a megacity, the majority of citizens were freedmen and descendants of freedmen. The Greeks could not understand that. It was beyond their frame of mind.

What was the wars between Greece and Rome called?

There were four Macedonian wars between Rome and Macedon, the most powerful state in mainland Greece.
There was the also the Roman-Seleucid war in which Rome and two of her allies (the island of Rhodes and the kingdom of Pergamon in western Turkey) fought the Seleucid kingdom (a kingdom which covered the Middle East and part of Turkey) and its allies in mainland Greece, the Aetolian league (a league of city states in central Greece). Rome repelled a Seleucid attempt to invade Greece.

Was The First Punic War a war between Rome and Greece?

The first Punic war, like all the Punic wars, were between Rome and Carthage.

Teaming with Greek Soldiers, Xena plots against Caesar and Pompey, whose war between one another has spilled over from Rome to Greece, and Xena plans to send them both back to where they came from.

The naval Battle of Myonessus was fought in 190 BC during the war of Rome against Antiochus III the Great for the domination over Greece, between a Seleucid Empire fleet and a Roman plus Rhodian fleet. The Romans were victorious.
The account of Appian:

The Treaty of Tempe ended the Second Macedonian War (200 BC – 196 BC) between the Roman Republic and Philip V of Macedon. Rome won the decisive Battle of Cynoscephalae in 197 BC, and by the Treaty of Tempe, 196 BC, they forced Philip to give up Macedonia's possessions in Greece and Asia, and pay a war indemnity of 1000 talents.