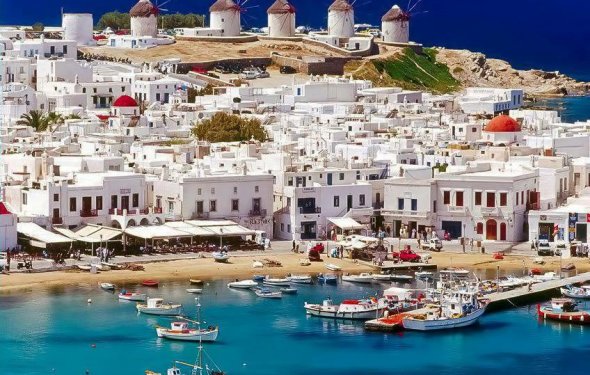 MYKONOS - The legends of Mykonos begin with tales of seduction and oblivion. The island of Ithaca, Cavafy told us in his famous poem, is more than a destination; it is a state of mind. Mykonos has come to symbolize much more than Ithaca ever meant to poets and travelers alike; since the 1950s, it has been a paradisiacal escape, a kingdom for all the barefoot kings and nowadays, a stronghold of opportunity and affluence in a bankrupt country.

There are as many lost treasures as bones buried under the streets of this greedy island that has enticed armies, pirates, moguls and tourists alike from the time of the poets to the days of Aristotle Onassis and, most recently, Starbucks. People have flocked here since ancient times to enjoy or cash in on the hedonistic promises of an island that became synonymous with beauty, pleasure and profit. Appropriately, one of the most popular beaches here is called Super Paradise.

Today, there are many names for this paradise: Manhattan of the Aegean, Isla Bonita, Rock of the Giants, island of the winds, Diva of the Aegean. While the rest of Greece is suffering the worst depression since WWII, Mykonos remains a solid castle of prosperity, a trillion-euro-private-investment that blinks from afar like the most expensive jewel of the Mediterranean: stunning villas designed by starchitects, glitzy fashion superstores, sophisticated galleries, luxurious hotels and countless A-list restaurants that surpass in service, style and prices any establishments in the rest of Greece.

These days, some liken Mykonos to a modern day Pompeii - a city of excess about to be swept away by the detritus of ash and pumice released from the volcanic explosion of the Greek economy. But, I assure you, this won't happen; if this island enticed to death parades of Persians and, later, Arabs, Venetians and Turks, it can afford to deal with the harsh austerity that plagues the rest of the country.

"We are producing our own wealth, " a local businessman tells me. "We are a hard-working money-making-minded people that have survived many hardships. Our drive and our dream are more American than European. If Mykonos ever gained independence from the rest of Greece, it would be one of the richest microstates on the globe."

"It has helped to put Greece back on the map again, " the Guardian noted. "Visitors have signaled greater overall satisfaction with Mykonos than Ibiza, Sardinia or St. Tropez - its main competitors."

"It has helped to put Greece back on the map again."

Despite Greece's worsening economic odyssey this summer, Mykonos' cashiers are filling: hotels and villas are full; during the summer months, its small airport is one of the busiest in Europe. Not surprisingly, the night of June 27, when the rest of Greece was afire with uncertainty about the referendum just called by Prime Minister Alexis Tsipras, the town of Mykonos glittered under an umbrella of fireworks. It was Saturday night, and the main news celebrated on the island was the American Supreme Court's decision in favor of gay marriage.

Of course, gays were getting "married" on Mykonos long before any Supreme Court's decision back when homophobia reigned in the rest of the globe. During the 1960s and 1970s, gays came here to feel free and celebrate make-believe weddings outside the legendary Pierro's bar where races and classes mingled and bodies swung when the music played. The Greek Dolce Vita began on Mykonos and, as a local historian once put it, it grew into something "more Felliniesque than a Fellini film." That was the time that it was a shame not to be gay on Mykonos and Swinging Mykonos, as much as London, emerged as a pleasant aftershock of May 1968.

"The secret of the Mykonian success is tolerance, " Anna Kousathana tells me. "Mykonos became an international paradise because of that. Provinciality was never part of the Mykonian mindset. I remember back in the late 1960s, there was a policeman here who was very strict with the tourists, especially women. He would stop them if they wore shorts and admonish them, 'What is that? Go and change!' Before he knew it, he was fired by the local authorities! People here never tolerated such closed-mindedness."

Paradise Beach, Mykonos, Greece
Popular Q&A
Related Posts
Categories
Latest Stories
Average weather in Athens Greece Weather lowdown Although summer in Athens began in June, on average the...
Greece and Turkey Travel Travel on a Rick Steves tour through Greece or Turkey for the very best...
Hotels Resorts in Greece This stunning beach resort is situated in Crete on the Cretan sea. It is...
Island of Rhodes, Greece Loyalty to Sparta ended in 395 BCE when democracy was established on the...
Greece Ridge Center Mall Avis Location Information » 317 Greece Ridge Center Drive Location Contact...
Links How deep is eardrum q tips Why do the tips of my breasts hurt How to clean...
Interesting facts