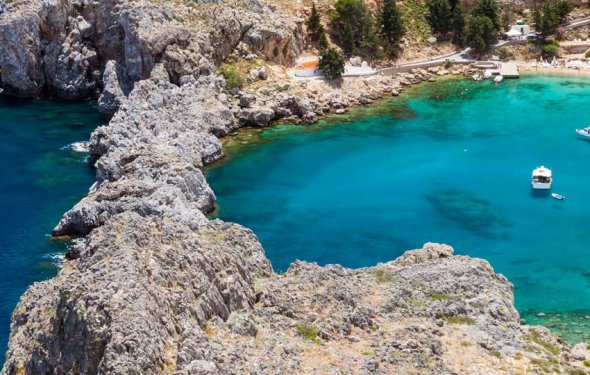 The Greek Islands comprise more than 6, 000 islands and islets covering much of the eastern Mediterranean. Only about 230 Greek islands are inhabited and, of these, just 80 or so have more than 100 permanent inhabitants.

The Greek islands are traditionally grouped into six major clusters:

Ionian: Found off the north-west coast of mainland Greece in the Ionian Sea these contain the popular holiday islands of Corfu, Kefalonia and Zante.

Saronic: These lie in the Saronic gulf near Athens and the main islands here are Aegina and Poros.

Cyclades: A large, dense group of islands in the central Aegean Sea that include the popular holiday islands of Mykonos and Santorini.

North Aegean: A loose island group to the north-east of Greece. The main holiday destinations here are Thassos, Lesvos and Samos.

Sporades: A small, tightly-knit island group just off the east coast of Greece that include Skiathos and Skopelos.

Dodecanese: A long and loose string of islands that roughly follow the Turkish coast and include the popular holiday beaches on Kos and Rhodes.

Each island group has its own flavour and each island within a group has its own character. The Ionian, for example is characterised by lush greenery, the Cyclades are 'typical' Greek islands of whitewashed cube houses on windy, rocky outcrops; the Dodecanese, close to the Turkish mainland, are the hottest, particularly in the south.

The Ionian Islands are is one of the most popular holiday destinations in Greece. There are about 25 islands in this group but only a handful are of interest to the average holidaymaker. Corfu, Kefalonia, Zante and, more recently Lefkas, have all become big hitters in the Greek island holiday stakes.

The smaller islands of Paxi and Ithaca tend to appeal to those seeking a quiet retreat but they are relatively difficult to get to as inter-island ferries are not as frequent as in other island groups. Islets such as Antipaxos, Kalamos and Skorpios are suitable only for day trip visits.

The Ionian islands are the nearest to the UK for flight times and have lush, green interiors thanks to relatively heavy winter rains - Corfu gets twice as much winter rain as London.

The southern Ionian islands have suffered heavily from earthquake damage and little is left of their architectural heritage. The prevailing historical influence is from the West - the Venetians, French and British. Today, the tourists are mostly British and Italian. And although popular with package tour operators offering rock-bottom prices there is plenty of room in the Ionian island for those who shun mass tourism.

Even the most popular Ionian islands of Corfu and Zante have their quiet, hideaway corners and some of the outlying islets, such as Ithaca and Meganissi, are heavenly, tranquil backwaters.

The Saronic Islands are found in the Saronic Gulf just to the south of the Greek capital of Athens. The main islands in this group are Aegina, Agistri, Poros, Methana and Salamis.

The islands of Hydra and Spetses are often included in this group although they are not in the Saronic Gulf proper but closer to the Argolic Gulf. For this reason the group is sometimes referred to as the Argo-Saronic.

The main inhabited islands of the Saronic group are Salamis (the famous site where the ancient Greek navy defeated the Persians), Aegina, Angistri, and Poros. Salamis, despite its romantic history is now virtually an industrial suburb of Piraeus and, although it has a couple of beaches, has few foreign tourists.

Many mainland Greeks have holiday homes in the Saronic Islands, which are regularly served by ferries from Piraeus and the Peloponnese.

The Cyclades Islands are home to many of the most popular Greek islands. The Cyclades are found in the central and southern area of the Aegean Sea and is composed of 39 islands of which 24 are inhabited.

The Cyclades have islands for all tastes - from the spectacular volcanic scenery of Santorini to the jet-set beauty spots on Mykonos, the party island of Ios to the gentle rolling hills of Paros. Other notable Cycladic islands include Amorgos, Andros, Ios, Folegandros, Naxos, Paros and Syros.

Mykonos and Santorini are must-stop spots for Mediterranean cruise liners and bring in a regular daily fistful of credit card carrying tourists while the westernmost islands see only the most ardent independent island hoppers.

Where does the capital of Rhode Island lie on the map.

On the top side where there are islands

Where is Rhode Island on a map?

Rhode Island is in the northeastern US bordered by the Atlantic Ocean, Connecticut, Massachusetts, & New York. !

Pefkos or Pefki, Greek: Πεύκος (Πεύκοι), is a well known beach resort located on eastern coast of Rhodes, just a few kilometers south of Lindos, 56 kilometres (35 mi) from the capital city Rhodes. The island of Rhodes is the largest of the Dodecanese islands, on the eastern Aegean Sea, just a few miles from the coast of the Asia Minor. Pefkos...

Willard Manus (born September 28, 1930) is a Los Angeles-based novelist, playwright, and journalist. His best known book is Mott the Hoople, the novel from which the British 70s rock band took their name.
Manus was born in New York. He is the author of This Way to Paradise: Dancing on the Tables, a memoir of life in Lindos, Rhodes, Greece, from...

Willard Manus (born September 28, 1930) is a Los Angeles-based novelist, playwright, and journalist. His best known book is Mott the Hoople, the novel from which the British 70s rock band took their name.
Manus was born in New York. He is the author of This Way to Paradise: Dancing on the Tables, a memoir of life in Lindos, Rhodes, Greece, from...