Gods and goddesses of Greece and Rome 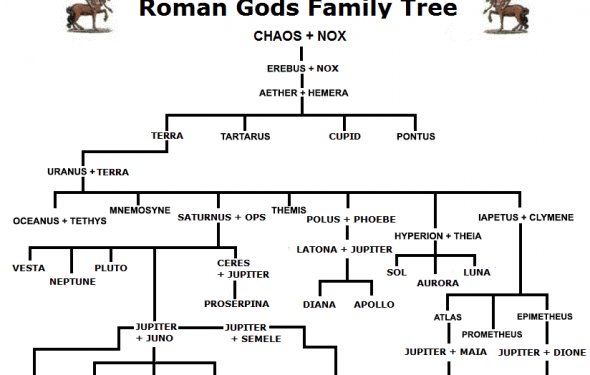 In Greek mythology, twelve gods and goddesses ruled the universe from atop Greece's Mount Olympus. These Olympians had come to power after their leader, Zeus, overthrew his father, Kronos, leader of the Titans. All the Olympians are related to one another. The Romans adopted most of these Greek gods and goddesses, but with new names.

The most powerful of all, Zeus was god of the sky and the king of Olympus. His temper affected the weather, and he threw thunderbolts when he was unhappy. He was married to Hera but had many other lovers. His symbols include the oak and the thunderbolt.

See also: The Reign of Thunder and Lightning: Olympus Under Zeus.

Hera was goddess of marriage and the queen of Olympus. She was Zeus's wife and sister; many myths tell of how she sought revenge when Zeus betrayed her with his lovers. Her symbols include the peacock and the cow.

Poseidon was god of the sea. He was the most powerful god except for his brother, Zeus. He lived in a beautiful palace under the sea and caused earthquakes when he was in a temper. His symbols include the horse and the trident (a three-pronged pitchfork).

See also: The Brothers of Zeus: Poseidon and Hades.

Hades was king of the dead. He lived in the underworld, the heavily guarded land where he ruled over the dead. He was the brother of Zeus and the husband of Persephone, Demeter's daughter, whom he kidnapped.

Aphrodite was the goddess of love and beauty, and the protector of sailors. She may have been the daughter of Zeus and the Titan Dione, or she may have risen from the sea on a shell. Her symbols include the myrtle tree and the dove.

Apollo was the god of music and healing. He was also an archer, and hunted with a silver bow. Apollo was the son of Zeus and the Titan Leto, and the twin of Artemis. His symbols include the laurel tree, the crow, and the dolphin.

See also: Night of the Hunters: Artemis and Apollo.

Ares was the god of war. He was both cruel and a coward. Ares was the son of Zeus and Hera, but neither of his parents liked him. His symbols include the vulture and the dog, and he often carried a bloody spear.

Artemis was the goddess of the hunt and the protector of women in childbirth. She hunted with silver arrows and loved all wild animals. Artemis was the daughter of Zeus and Leto, and the twin of Apollo. Her symbols include the cypress tree and the deer.

Athena was the goddess of wisdom. She was also skilled in the art of war, and helped heroes such as Odysseus and Hercules. Athena sprang full-grown from the forehead of Zeus, and became his favorite child. Her symbols include the owl and the olive tree.

Hephaestus was the god of fire and the forge (a furnace in which metal is heated). Although he made armor and weapons for the gods, he loved peace. He was the son of Zeus and Hera and married Aphrodite. His symbols include the anvil and the forge.

Hestia was the goddess of the hearth (a fireplace at the center of the home). She was the most gentle of the gods, and does not play a role in many myths. Hestia was the sister of Zeus and the oldest of the Olympians. Fire is among her symbols.

See also: Home and Harvest: The Sisters of Hera.

Hermes was the messenger god, a trickster, and a friend to thieves. He was said to have invented boxing and gymnastics. He was the son of Zeus and the constellation Maia. The speediest of all, he wore winged sandals and a winged hat and carried a magic wand.

Demeter was the goddess of the harvest. The word “cereal” comes from her Roman name. She was the sister of Zeus. Her daughter, Persephone, was forced to live with Hades each winter; at this time Demeter let no crops grow. Her symbols include wheat.

Dionysus was the god of wine, which he invented. In ancient Greece Dionysus was honored with springtime festivals that centered on theater. Dionysus was the son of Zeus and Semele, a mortal. His symbols include ivy, the snake, and grapes.

Who are the gods and goddess of Greece?

Hi, a lot of mythological figures were worshiped as gods and goddesses in Ancient Greece and Rome, and to a lesser degree, still are. Now that we have a Religion domain, those figures can be typed Deities:

World Civilizations Chapter 4 is about the civilizations of Classical Greece and Classical Rome and the regions that they conquered. This area started developing by about 800 B.C.E. and eventually fell apart around 500 C.E. Greece and Rome were also the bases of Western culture, but as this region developed, it was a lot different than its...

Both Hinduism and Hellenism are ancient traditions. However, Hinduism still survives today, being the third largest followed religion in the world.
The gods and goddesses of the two religions have many similarities, as they both derive from the Proto-Indo-European religion. For example, both Indra and Zeus hold a lightning bolt as a weapon, sit...