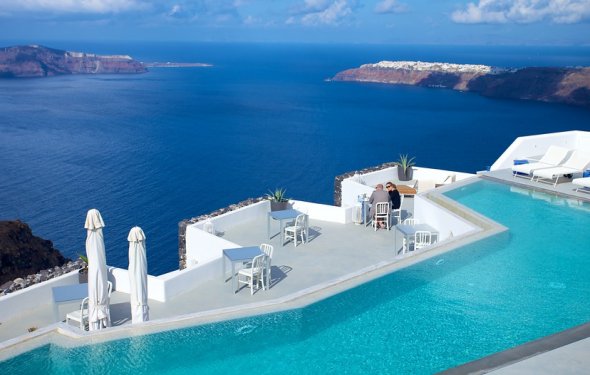 A view of Santorini with the blue water of the caldera. (Photo: Santorini estate image by Loshkaryov Sergey from Fotolia.com )

Santorini is a member of the Cyclades Islands off the coast of Greece. According to Frommer's, the island is also known by the name “Thira.” The harbor of Santorini was actually formed around 1500 B.C. When a volcano erupted and blew out the center of the island. The harbor is part of the crater, or caldera, that was formed as a result of the eruption. If you are anxious to see the clear blue waters of the caldera there is more than one way for you to get to the island.

Take a flight from the United States to any city in Europe as there are no direct flights from the United States to Santorini. If you are trying to save money, fly into the city with the cheapest airfare, which usually is either London or Dublin. You can then book a ticket to Athens on one of the budget airlines in Europe, such as easyJet or Ryanair. During the summer, easyJet flies into Santorini from London Gatwick Airport so you would not need to go to Athens first.

Use the train service to get to the airport in Athens if you prefer rail travel. Point-to-point tickets can be purchased at any rail station. A rail pass can also be purchased from RailEurope.com if you want a train pass that covers several countries and gives you unlimited travel for a set period of time.

Fly out of Athens on Olympic Airways or Aegean Airlines. As of February 2010, these are the only two airlines that offer regular flights to Santorini all year long. The flight time averages 45 minutes, with the flight landing at Santorini National Airport.

Book a direct flight to Santorini National Airport during peak travel season, which is late April through early October. This is the only time of year that airlines other than Olympic Airways or Aegean Airlines fly into Santorini. Airlines available during this period are Air Berlin, easyJet, Edelweiss Air, German Wings, Condor, Meridiana, ThomasCook, Jetairfly and Transavia. These airlines fly from cities that include Amsterdam, London, Brussels, Milan, Vienna, Düsseldorf, Munich, Zurich and Frankfurt.

Ride the ferry from the port of Pireaus, which can be reached in just over an hour from the Athens airport. You can buy your ferry ticket at the port. Three different ferries can take you to Santorini. The normal ferry costs $33 and takes almost 10 hours to arrive. The Blue-Star ferry costs $38 and takes seven hours to arrive. The fastest option is the high-speed ferry, which costs $55 and takes five hours to get to Santorini.

Greece Travel: On the plane from Athens to Santorini

How to get the ferry ticket? Greece. /. Santorini and Mykonos.

yiasou Tan,
REF:  Night ferries to Santorini ... Normally during the months April thru October there is a night ferry that leaves Piraeus between 4 and 8 in the evening.  To find out the exact time you must go to a ticket agency in Athens (Syndagma area is good)maybe 24-hrs ahead of time, ask the exact time that the ferry leaves and buy ticket at that time...sleeping berth will cost an extra 10-euro =IF=
you want one.  You can sleep on deck or on the floor or in chairs if you prefer for nothing.
You can also go to the port of Piraeus and buy your ticket there.  Cheapest way to the port…

Santorini (Greek: Σαντορίνη, pronounced [sadoˈrini]), classically Thera ( /ˈθɪrə/), and officially Thira (Greek: Θήρα [ˈθira]), is an island in the southern Aegean Sea, about 200 km (120 mi) southeast from Greece's mainland. It is the largest island of a small, circular archipelago which bears the same name and is the remnant of a volcanic...