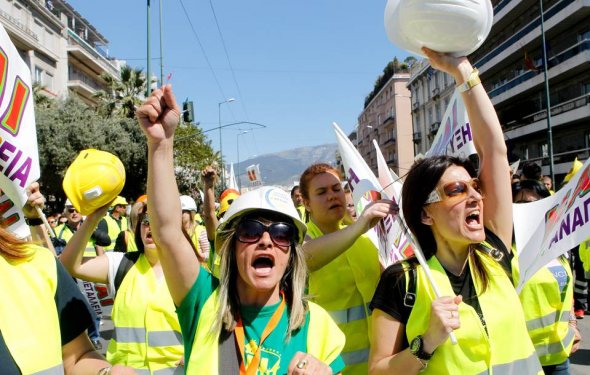 Bill Below, OECD Directorate for Public Governance and Territorial Development

to be published on Monday, offers a dashboard of key indicators to help analyze international comparisons of public sector performance. Given the timing of the release, it seems appropriate to focus this powerful tool on Greece to gain a balanced understanding of Greece’s challenges—and strengths.

Budget balance. While a large number of OECD countries were running primary fiscal deficits, Greece ran a budget surplus of 0.4% of GDP in 2014. If interest payments on the public debt are taken into account, Greece recorded an overall budget deficit of 3.5% of GDP in 2014.

Public spending. Public expenditures dropped considerably since 2009 both in per capita terms and as a share of GDP. In 2014, the Greek government spent annually USD 12, 942 per capita (on a purchasing power parity basis) which is about USD 3, 700 below the level of per capita public spending in 2009 (USD 16, 643). As a share of GDP, general government spending decreased by 4.7 percentage points between 2009 and 2014, from 54.0% of GDP to 49.3%, among the highest decrease over the period.

Public debt. According to the Systems of National Accounts definition, government debt reached 181% of GDP in 2014. This is much higher than the OECD average of 109% of GDP for the latest year available.

Old age pensions accounted for 14.4% of GDP in 2013 or about three quarters of social protection spending which is the highest share among OECD countries.

Healthcare needs. More than 16% of low-income individuals reported having some unmet care needs for financial or other reasons in 2013. This is among the highest share across OECD countries.

Government at a Glance 2015 identifies progress and persisting challenges in public sector reform and highlights areas where public sector efficiency might be further improved. It helps countries measure their own achievements in a comparative perspective, showing trends across countries and over time. With this information, countries can benchmark their actions and achievements and better explore the link between governance practices and performance.

For journalists, analysts and the greater public, Government at a Glance 2015 provides an objective, comparative view on the progress of countries as they strive to deliver prosperity, inclusiveness, fairness, well-being and accountability.