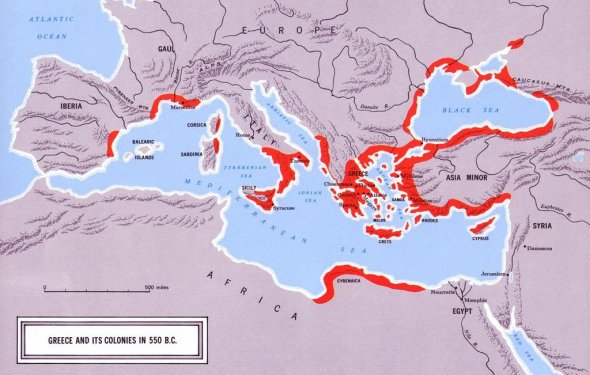 Excavations show that the first settlement in Ancient Greece dates from the Palaeolithic era (11, 000-3, 000 BC). During the second millennium BC, Greece gave birth to the great stone and bronze civilization: the Minoans (2600-1500 BC), the Mycenaeans (1500-1150 BC) and the Cycladic civilization. These were the first important civilizations in the Greek history.

The Classical Period (6th-4th century BC) is very famous worldwide. The peak of the classical period is the 5th century BC, when the foundations of the western civilization were created in Athens. This city-state became the greatest naval power of ancient Greece that time and developed all domains of culture, including philosophy, music, drama, rhetoric and even a new regime called democracy. It is not exaggerating to say that this period changed the history of the world.

Athens and Sparta were the most powerful city-states in ancient Greece and the other city-states were actually allied to one or the other of these two towns. In the 5th century, the allied Greek city-states managed to repel the invasion of the Persians. However, the Peloponnesian War that followed, between Athens and Sparta, led to the decline of the glorious classical era.

That was when the kingdom of Macedon, a tribe residing in northern Greece, came to power defeating and conquering the other Greek city-states. After the death of king Phillip II, his son Alexander started a large expedition in Asia. In 334 BC, Alexander the Great invaded the Persian Empire and his army conquered all the way till India. However, in 323 BC, he dies in Babylon at the age of 33 and his Macedonian empire is torn apart and governed by his heirs.

From 168 BC and onwards, the Romans conquer Greece and a new period starts for the Greek history. This is actually the period where ancient Greece turns into Roman Greece. That time, the country becomes the field of many important battles and new cities are constructed, such as Nikopolis in western Greece. Athens and generally the Greek culture declines, but the Greek becomes a second official language for the Roman Empire. The Romans read the classical philosophers and base their religion on the Olympian gods. In the 3rd century AD, the powerful Roman Empire starts to decline and it is divided in two pieces, the Eastern and the Western Roman Empire.

While the Western Roman Empire was gradually conquered by barbaric North-European tribes, the Eastern Roman Empire with Constantinople (Byzantium) as capital developed and was turned into the Byzantine Empire that lasted for about 1, 000 years. At this point of history, Christianity becomes the official religion of the new empire, new territories are occupied and new state laws are formed. These laws will later constitute the first laws of the modern Greek state, as it will be formed in the 19th century.

1. Greek property-owning men were expected to be willing to take up arms to defend their homeland should a war start.
2. Helots were slaves and their rebellions led to the Spartan Constitution being created.
3. Spartan women were expected to keep themselves healthy and strong so that they may give birth to strong Spartan men.
6. Establishing democracy in Athens
11. I know one to be the war with Sparta.

What was the history of ancient Greece?

Greece had and still has alot of history but to find the main points in its history you have to pick out what you think it is instead of relieing on others. i hope that's good enough for you.

The History of Greece traditionally encompasses the study of the Greek people, the areas they ruled, and the territory of now composing the modern state of Greece.
The scope of Greek habitation and rule has varied significantly through the ages, and as a consequence the history of Greece is similarly elastic in what it includes. Each era has...

The historical period of Ancient Greece is unique in world history as the first period attested directly in proper historiography, while earlier ancient history or proto-history is known by much more circumstantial evidence, such as annals, chronicles, king lists, and pragmatic epigraphy.
Herodotus is widely known as the "father of history"...

Johannes Gaitanides (born 1909 in Dresden; died 1988 in Schondorf) was a German author and journalist.
Gaitanides was born as a son of a Greek father and a German mother. He studied in Munich German literature, history and literature. He finished his studies in 1936 with a dissiteration (Dr. phil.). After World War II he worked for several...