An insider's guide to the best beaches in Crete, including the top spots for golden sands, windsurfing and jet-skiing, and what to do at Váï , Paleóhora and Mýrtos
August 8, 2017 – 06:09 pm 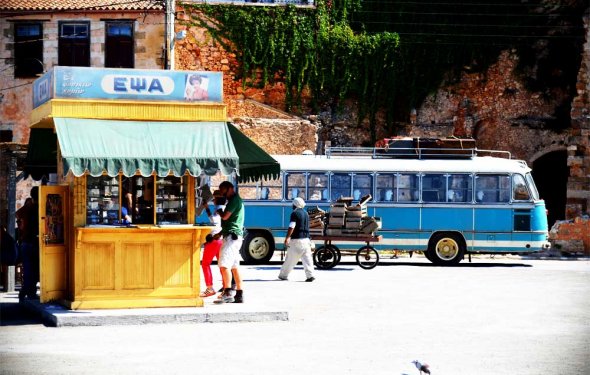 For the exotic Caribbean vibe – this is where Mars's "taste of paradise" Bounty bar advert was filmed in the early 1970s. Also known as Finikodassos (Palm Forest), this gently curving golden sand beach is backed by Europe's largest natural palm grove – some 500 densely clustered trees in an oasis fed by a stream – which have stood here for more than 3, 000 years. According to legend, the palms grew from date stones discarded by Saracen pirates and washed up by the sea. They are, in fact, a species of palm native to much of southern Greece and known to the ancients. Happily, they seem to be immune to the depredations of the Rhyncophorus weevil which has killed most of Greece's other palms – the trees here secrete a goo which envelops and suffocates the creatures.

Who goes?
A happy hippy enclave during the 1960s, Váï was later invaded by backpackers and rapidly degenerated into a rubbish-strewn campground. The palm grove was consequently proclaimed a conservation area and camping forbidden. Today, in high season (July to August) the beach is packed with predominantly north European tour groups from nearby resorts. More laid-back, independent travellers roll up here from May to June and September to October.

For the exotic Caribbean vibe – this is where Mars's "taste of paradise" Bounty bar advert was filmed.

What is there to do?
Hire a sunbed and straw umbrella then take to the water with a snorkel. Jet skis and windsurfing equipment are available for rent. After the beach, visit Toploú Monastery (daily 9am–7pm, winter closes earlier), a 15th-century fortified retreat, housing a fine collection of Byzantine and post-Byzantine icons. The largest landowner in the region, Toplou counts Váï Beach among its properties.

Bars and bites
Facilities on the beach include a sprawling Greek taverna and snack bar, plus several fast-food kiosks in the nearby car park. Infinitely more inspiring, a 10-minute drive south in the hillside village of Angathiás, is Taverna Angistri (aka Nikolas O Psaras; 0030 8), purveying some of the freshest and most keenly priced fish around. The views from the terrace over Koureménos and Hióna beaches are magnificent.   Just downhill from Angathiás, at Hióna beach, are three more full-service tavernas – Kakavia is fine.

Getting there
From the popular north coast resort of Sitia, public buses run several times daily to Váï (23km distant) near the island's northeastern tip. From Váï's car park (€3 fee charged). It's a 2-minute stroll to the beach.

Arguably the best beach on the southwest coast – or rather two beaches, bracketing the lively resort here: long, sandy Pahiá Ámmos stretching west, and compact, all-pebbly Halikiá on the east.

Who goes?
Everybody, it seems – from grown-up alternative types nostalgic for their1970s local sojourns to families with toddlers in tow. The season is long here, and winter house-rentals remain popular. Jackson Webb’s The Last Lemon Grove (1977) captures the place’s early days perfectly.

Paleóhora is arguably the best beach on the southwest coast.

What is there to do?
Pahiá Ámmos is ideal for windsurfing, with a seasonal board-rental facility to hand. Just 3km drive west, the sandy coves at Gramméno are equally good, and generally less crowded. More ambitiously, hike 4 hours east along a coastal path to ancient Lissos and (in another hour, partly through an impressive gorge) to the smaller retreat of Soúgia, taking a boat back (or vice versa); embark on other excursions to remote Gávdos islet or to the Caribbean-ish lagoon at Elafonísi. Dolphin/whale-spotting cruises are also offered

Bars and bites
Plenty of choice in the little town which comes alive after dark, with the main street pedestrianised. See our listing for Methexis on the Crete restaurants page. Just inland from the south end of Pahiá Ámmos, The Third Eye (Apr–Oct; tel 0 42223) is one of the best vegetarian restaurants in Greece, with Indian and southeast Asian dishes featured. See also our listing for Skala under the best Cretan bars.

Mýrtos was, along with Váï and Mátala, one of the original Cretan hippie meccas of the 1960s and 1970s, and despite gentrification still retains some of that ethos. Even when the rest of eastern Crete is wind-buffeted, the kilometre-long, fine-pebble beach here at the base of Mt Díkti’s foothills stays protected.

Who goes?
A veritable Babel of nationalities, with a decidedly bohemian ethos, at least in May/June and Septenber/October. As a south-coast suntrap, there’s appreciable tourism up to Christmas.

Mýrtos attracts a veritable Babel of nationalities, with a decidedly bohemian ethos.

What is there to do?
Clusters of sunbeds and umbrellas set out by the various tavernas are free of charge, though with the expectation that you’ll patronize the sponsoring establishment during the day. Towards the west end of the beach, there’s a low-key, Italian-run watersports franchise – Hobie cats, kayaks and such. The little town of Mýrtos fringing part of the beach, despite wartime destruction during late 1943 in reprisal for resistance activities, is cheerful and characterful, with plenty of shopping opportunities.
Bars and Bites
The seaside esplanade is packed with eating and drinking possibilities. Ca’Nova halfway along (0 51321) is tops for varied breakfasts and wood-oven pizzas, while you can tuck into snails and fáva purée at Platanos (0 51363; platanosrestaurant.jimdo.com), a block or so inland under the namesake plane tree.

Getting there
There are five daily buses Mon–Fri from Ierápetra, eastern Crete’s second town, just 17km east, but only two on Saturday and none Sunday.

You'll have seen it on posters or brochures long before you arrive, so will have no trouble recognising it – a low islet tethered to the most southwesterly point of the Cretan mainland by a slightly pink-tinted sandspit, the two cradling a shallow lagoon with tropical-turquoise water.  The open sea south of the spit actually proves more swimmable.  Although parking is, surprisingly, free, sunbeds and brollies on the beach are not, and those wanting to just spread a towel/mat or pitch a beach tent are urged briskly by wardens to remove themselves from the vicinity of the concessions.

Everybody and anybody – it's one of the most promoted days out in western Crete. Stay the night in the nearby eponymous hamlet to derive more relaxation from the place.

Elafonísi is a low islet tethered to the most southwesterly point of the Cretan mainland by a slightly pink-tinted sandspit.

Crete-Greece (2)
Related Posts
Categories
Latest Stories
Average weather in Athens Greece Weather lowdown Although summer in Athens began in June, on average the...
Greece and Turkey Travel Travel on a Rick Steves tour through Greece or Turkey for the very best...
Hotels Resorts in Greece This stunning beach resort is situated in Crete on the Cretan sea. It is...
Island of Rhodes, Greece Loyalty to Sparta ended in 395 BCE when democracy was established on the...
Greece Ridge Center Mall Avis Location Information » 317 Greece Ridge Center Drive Location Contact...
Links How deep is eardrum q tips Why do the tips of my breasts hurt How to clean...
Interesting facts

The Sitia Mountains are a mountain range in the east of Lasithi Prefecture in eastern Crete in Greece. The mountains descend to cultivated plains and old villages and then down to a coastline of small fishing villages and sandy beaches.

Koutsouras (Κουτσουράς) is a village in Lasithi prefecture, in Crete, Greece 22 kilometers east of Ierapetra. Its population is 818 (2001 est.) It was the headquarters of the municipality of Makry Gialos (Dimos Makry Gialou) and is the biggest village in the region. Key industries include agriculture and tourism. It has nice beaches and a golf...

Kalo Chorio (Greek: Καλό Χωρίο, "good village") is a village in the municipality of Agios Nikolaos, Lasithi, Crete, Greece. Kalo Chorio village has a population of around 900, nestles attractively in the midst of a verdant hilly landscape, where olive groves and abundant and colourful mediterranean shrubs and plants reach all the way down to...