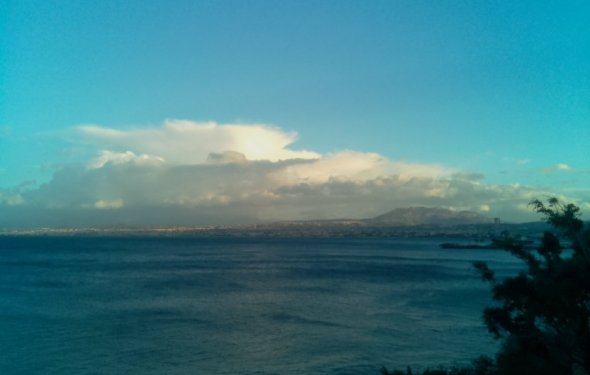 Crete is the largest and most populous of the Greek Islands. In fact, it’s so large that it’s the fifth largest island in the Mediterranean, being just beaten by Sicily, Sardinia, Cyprus and Corsica. Crete enjoys a warm Mediterranean climate with hot, dry summers and mild, rainy winters. Throughout the year, the temperature typically varies from 9°C to 29°C, rarely dropping below 6°C or rising above 31°C.

Crete has the warmest climate in Greece, thanks to its southerly location and the surrounding Mediterranean Sea. The central mountains, which stretch from east to west, create a natural barrier to the north-westerly prevailing winds. This results in great regional variation in weather conditions across the island.

Northern Crete is similar to most other European Mediterranean resorts. Southern Crete, on the other hand, is hotter, drier and sunnier, averaging over 2800 hours of sunshine a year. This part of the island resembles the coastal regions of North Africa in terms of heat and aridity. Southern Crete’s similarity to North Africa allows African swallows to remain there year-round.

Mountainous regions of the island are cooler and see more pronounced seasons, with heavy snowfall in winter at high altitudes. On the mountain peaks, snow can remain as late as June and in midwinter, mountain passes can become completely blocked off due to snowfall.

Crete’s microclimates are reflected by the landscape and vegetation. The south is sparsely vegetated, mostly with shrubs and grasses, while the north is considerably greener. One might expect tourists to flock to the warmest areas of the island, but in fact Crete’s most popular resorts – Rethymnon, Hersonissos, Stalis and Malia – are located on the north coast.

The verdant landscape of the north coast with its milder temperatures has been deemed preferable by far to the desert-like south. However, this in itself is a selling point for the south of Crete. Southern Crete still has many beaches that remain virtually deserted in the peak of the tourist season and many towns are free from the garish markings of mass tourism.

Summer – classed as June to September – is the most popular time to visit Crete, when temperatures are high and rainfall is low. At this time of year, the average temperature is around 25°C, peaking at 26°C in July and August, which are the hottest months of the year. There is a big difference between daytime and evening temperatures – average highs range from 27°C to 28°C, whilst average lows range between 18°C and 22°C. This sharp decrease in temperature after sunset provides some much-welcome relief for travellers struggling with the heat of the Mediterranean sunshine during the day. Although these average low temperatures are very mild, they can feel a couple of degrees cooler than they actually are, due to low humidity and the sea breeze blowing in off the coast.

Although temperatures generally keep under 30°C, they can rise up to a stifling 40°C in the south, when the island is affected by siroccos – hot winds blown over from the Sahara Desert in Northern Africa. Sirocco winds first hit the south of Crete and blow northward, bringing with them extremely high temperatures, aridity and airborne sand. As a result the sky can become hazy and the air can often appear dusty.

Crete’s prevailing wind is from the northwest and is known as the meltemi. This cool wind is coveted by sailors, wind surfers and kite surfers, as well as sunbathing holidaymakers in need of some relief from the sizzling summer sunshine.

At this time of year, Crete experiences a huge number of daily sunshine hours – 11 in June, 13 in July (the sunniest month) 12 in August and ten in September. With so much sunshine, a day at the beach during your summer holiday in Crete is practically obligatory. And after you’ve had your fill of sunbathing on the sand, you can take a dip in the sea to cool off. During this season, the average sea temperature for the waters around the island is remarkably warm, ranging from lows of 22°C in June up to highs of 25°C in August.

As you’d expect for a Mediterranean island in summer, rainfall is extremely unlikely to occur in Crete during this season. July through August sees a minute average of 1mm of precipitation each month, whilst September – the wettest month of the season – sees just a smidge more at 10mm over the course of two days.

Autumn – classed as October and November – in Crete is a fair bit cooler than summer, but compared to most of northern Europe, the island is still very mild. Holidaying in Crete in autumn is best for travellers who don’t mind the odd overcast rainy day and are more concerned about avoiding the dense crowds of the peak season. At this time of year, the average temperature starts off at 20°C and drops down to 17°C in November.

Average highs of 24°C-21°C during the daytime make this a great time to visit Crete for sightseeing and exploring, instead of lounging by the pool or at the beach. With a mere six hours of daily sunshine in October and three hours of daily sunshine in November, you won’t get much chance to sunbathe at this time of year, anyway. On the other hand, the sea retains the heat from summer during this season, when the average sea temperature is 23°C in October and 20°C in November. So even if the sky is overcast, the sea will still be warm enough to go for a swim.

Autumn evenings in Crete can get very chilly, with an average low temperature of 16°C in October and 13°C in November. Due to the low humidity and cool breeze which blows in from the coast, evening temperatures can often seem cooler than they actually are, so be prepared and take a jacket or a coat with you to make sure you stay warm after sunset.

After an extremely dry summer, the heavens open in Crete in autumn, when precipitation drastically increases. October sees an average of 40mm of precipitation falling over an average of six wet days. This increases up to 69mm of rain which falls over the course of eight wet days in November. While rainfall is limited to a few thunderstorms with moderate rainfall, threatening clouds are a common sight throughout the season.

Winter – classed as December to March – in Crete is mild, but wet and blustery. During this month, the average temperature is 13°C, peaking at 14°C in December and March and dropping down to a low of 11°C in January – the coldest month of the year in Crete. During the daytime, average highs are 16°C-17°C, whilst average lows drop considerably down to 10°C-8°C. With such cool nights, you’ll need to pack plenty of winter clothing to ensure you keep warm on an evening during your winter holiday in Crete.

Free Immersion (FIM) is a AIDA International freediving discipline in which the freediver dives under water without the use of propulsion equipment, but only by pulling on the rope during descent and ascent.
Performances may be done head first or feet first during the descent, or a combination of the two.
The current record holders are William...

Moni Toplou (Greek: Μονή Τοπλού) is a 15th century monastery located in a dry and barren area in the Lasithi regional unit, on the eastern part of the island of Crete in Greece. It is about 6 km north of the village of Palekastro and 85 km east of Agios Nikolaos. The monastery was originally called Panagia Akrotiriani (Virgin Mary of the Cape)...

The Mediterranean Diet Pyramid is a nutrition guide that was developed by Oldways, the Harvard School of Public Health, and the World Health Organization in 1993. It refers to the traditional Mediterranean Diet pattern of eating, suggesting the types and frequency of foods that should be enjoyed every day.
The diet is closely tied traditionally...