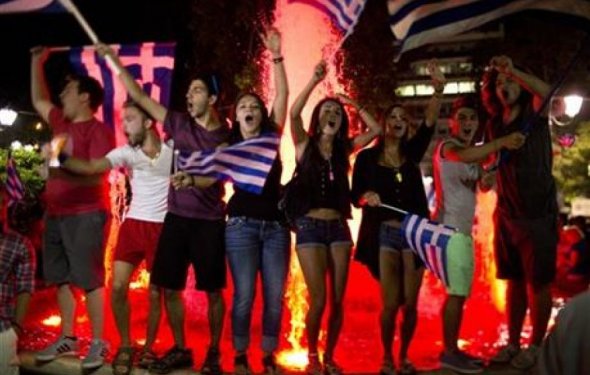 Like many other Americans, Lindsey Imus wants to know if it’s safe to visit Greece.

Oh, and there’s a referendum this weekend that will determine whether Greece accepts new austerity measures or leaves the Eurozone. The whole drama sent shockwaves through the world’s stock markets earlier this week.

Should Imus, a law student from Philadelphia, still stick with her August plans to spend two days in Athens, followed by a tour of the Greek islands?

“Is there anything that we should be doing to prepare?” she asks.

The short answer: yes and yes.

For now, there’s no need to cancel your plans to visit Greece, but experts warn that you do need to take certain precautions. Those include avoiding potentially unsafe areas and securing enough currency. The U.S. Embassy in Athens has a succinct advisory on its website.

And if Imus is hoping for additional bargains later this summer, she may have to wait a while—Greece is already priced fairly aggressively, compared with other European destinations.

Is Greece safe for tourists?

Greece’s tourism attractions remain safe for visitors, but that doesn’t necessarily apply to the rest of the country. John Rendeiro, the vice president of Global Security and Intelligence at International SOS, a travel security company, says the country is on edge, given its fragile economy. “While it’s safe to travel to Greece, travelers should avoid all related protests as a precaution, ” he says.

“The program sends out relevant warden messages—local email alerts for U.S. citizens abroad. These messages include information relevant to your travel, like time and place of protests or updates, ” he says.

Can you get money from Greek ATMs?

Yes. But it depends on who is using the ATM. “For users of debit or credit cards issued in Greece, the government has imposed an 60 euro per day withdrawal limit from ATMs, as part of their capital control measures, ” says Ashley Scarfo, a regional analyst at iJet, which provides travel security services to companies. “Holders of foreign-issued debit or credit cards are not subject to this cap.”

If you visit Greece, you may find yourself stuck in a longer-than-normal line to withdraw funds from an ATM, especially in a large metropolitan area. ATMs may run short on money in the coming days, Scarfo cautions. As a precaution, foreign tourists have been encouraged to bring extra euros when visiting Greece, especially in small denominations.

AHEPA Tourism invitation: "Travel to Greece - Is it Safe"?
Related Posts
Categories
Latest Stories
Average weather in Athens Greece Weather lowdown Although summer in Athens began in June, on average the...
Greece and Turkey Travel Travel on a Rick Steves tour through Greece or Turkey for the very best...
Hotels Resorts in Greece This stunning beach resort is situated in Crete on the Cretan sea. It is...
Island of Rhodes, Greece Loyalty to Sparta ended in 395 BCE when democracy was established on the...
Greece Ridge Center Mall Avis Location Information » 317 Greece Ridge Center Drive Location Contact...
Links How deep is eardrum q tips Why do the tips of my breasts hurt How to clean...
Interesting facts

Agios Isidoros (Greek: Άγιος Ισίδωρος) is a village in the municipality of Plomari, Lesbos Island, Greece. It is located just one kilometer outside the town of Plomari, South Lesvos. It has a unique pebbled beach which is one of the longest in Lesvos and voted as The 7th best beach in Greece due to the safety provided, the clean water and care...

The Olympic Games (Ancient Greek: τὰ Ὀλύμπια – ta Olympia; Modern Greek: Ὀλυμπιακοὶ Ἀγῶνες (Katharevousa), Ολυμπιακοί Αγώνες (Dimotiki) – Olympiakoi Agones) were a series of athletic competitions held for representatives of various city-states of Ancient Greece held in honor of Zeus. The exact origins of the Games are shrouded in myth and...

A pilot is a mariner who guides ships through dangerous or congested waters, such as harbors or river mouths. Pilots are expert shiphandlers who possess indepth knowledge of local waterways. Pilots are responsible under the law and maritime custom for conducting the safe navigation of the vessel. With the exception of the Panama Canal, the...