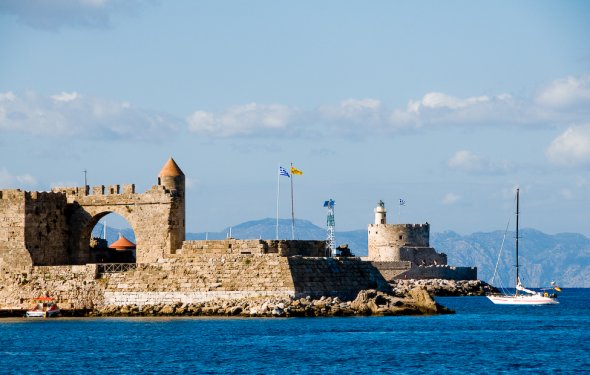 With the Knights as your guides...

In the heart of Rhodes, in the medieval city, a haunting and mysterious air wafts through the streets, summoned back to life through the centuries. The famous Order of the Knights of Saint John of Jerusalem, the Hospitallers, has left an indelible mark on the island. If one walks around the always lively town, one can almost hear the hoofbeats of the horses and the whispering voices of history.

The town was never deserted or abandoned. It is one of the rare survivors of the medieval world; it stands unscathed, in all its vibrant beauty. In 1988, UNESCO declared the architectural complex of the Knights of Rhodes to be World Heritage Site.
The feeling of exploring the medieval streets of Rhodes is difficult to put into words. Time seems to have stopped in the middle ages, and the atmosphere is shrouded in the haze of its knightly past. The cobbled streets and Gothic towers challenge the traveller to unlock their deepest secrets.

In 1309, after many great adventures, the military order of fighting monks from Jerusalem, the legendary Knights of Saint John of Jerusalem, arrived on Rhodes.

The Order established itself in the Byzantine city, which was built around the ancient Acropolis. Like a spiral in space and time, the castle city evolved around its ancient core. The ancient city, north of the island, was built in 408 BC following a perfect Hippodamian system of town planning. In the 7th century AD, the Byzantines fortified a small part of the original town, for reasons of safety. Later, the walls were extended to encompass an area of 175, 000 square metres.

With the arrival of the Knights of Saint John, Rhodes quickly became the great centre of their kingdom. The Order came to occupy an influential position in the eastern Mediterranean and simultaneously enjoyed great glory, wealth and reputation. From the heart of the Mediterranean they were able to put up strong resistance to repeated Turkish attacks. The great commercial port and the city, which came to occupy an area of 800, 000 square metres, stood impregnable for two centuries. A treaty with Suleiman the Magnificent in 1522, after a six month siege, marked the departure of the Knights, who sailed for Malta leaving behind them a true architectural gem.

The architecture of power

In medieval times, the town of Rhodes was divided by an internal wall in two sectors. The northern quarter, known as the “Chateau”, “Castrum” or “Castellum”, was where the administrative buildings, the hospital, the cathedral, and the residences of the Knights and the Grand Master were to be found. The houses of the laity, the street market, synagogues and churches were gathered in the southern quarter, the so-called “Ville”, “Burgus” or “Burgum”.

The monuments of knightly Rhodes exude the strength and knowledge of the great guilds of the Middle Ages. The buildings of the Knights are built in Gothic and Renaissance architectural styles, interspersed with Byzantine architectural features and later Ottoman influences. The overall effect is truly captivating.

The many great churches in the medieval city are very interesting. Some of them were later used as mosques. The churches of Agia Triada (the Holy Trinity), Agios Athanasios (St. Athanasius), Agia Aikaterini, (St. Catherine), the church of Panagia tou Kastrou (the Virgin of the Castle) and Agia Paraskevi are all excellent examples of sacred architecture.

Old Town Rhodes (Rodos) - Greece
Related Posts
Categories
Latest Stories
Average weather in Athens Greece Weather lowdown Although summer in Athens began in June, on average the...
Greece and Turkey Travel Travel on a Rick Steves tour through Greece or Turkey for the very best...
Hotels Resorts in Greece This stunning beach resort is situated in Crete on the Cretan sea. It is...
Island of Rhodes, Greece Loyalty to Sparta ended in 395 BCE when democracy was established on the...
Greece Ridge Center Mall Avis Location Information » 317 Greece Ridge Center Drive Location Contact...
Links How deep is eardrum q tips Why do the tips of my breasts hurt How to clean...
Interesting facts

Afantou (Greek: Αφάντου) is a village and a former municipality on the island of Rhodes, in the Dodecanese, Greece. Since the 2011 local government reform it is part of the municipality Rhodes, of which it is a municipal unit. It is situated on the east coast of Rhodes just south of the resort town Faliraki. From a total population of 6,712...

Lindos (in Greek: Λίνδος) is an archaeological site, a town and a former municipality on the island of Rhodes, in the Dodecanese, Greece. Since the 2011 local government reform it is part of the municipality Rhodes, of which it is a municipal unit. It lies on the east coast of the island. It is about 55 km south of the town of Rhodes and its...

The Tilos Park Association (TPA), is an NGO founded in July 2004 by TPA Director Konstantinos Mentzelopoulos; the entity is a Hellenic judicially registered non-profit association in Livadia, Tilos, Dodacanese, Greece. The TPA aim is to independently develop and implement nature protection actions and ecotourism. Tilos is a 63 km² Dodecanese...