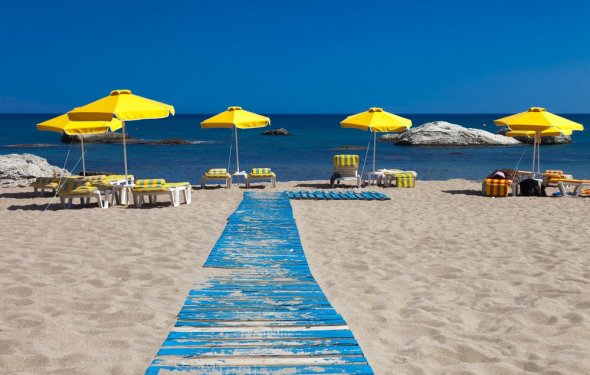 Rhodes is the largest of the Greek Dodecanese Islands, located south-west of mainland Greece and north-east of Crete. This island is best known for its beautiful beaches, ancient ruins and historical remnants of when it was occupied by the Knights of Saint John, as well as its pleasantly warm weather, due to the island’s southerly positioning within Europe.

The island, which is shaped like a spearhead, covers approximately 1, 400 km2, with a staggering 220km of that space being coastline. The city of Rhodes – the island’s capital – is located on the northern tip, as are the island’s ancient and modern harbours. Away from the city of Rhodes, the island is comprised of small traditional villages and large holiday resorts. Thanks to the mineral-rich spring water, there are also many spa hotels and standalone spas scattered across the island which specialise in balneotherapy.

Rhodes enjoys a typical Mediterranean climate with hot, dry summers and mild winters with a little bit of rainfall. Over the course of a year, the temperature typically varies between 10°C and 30°C, rarely dropping below 7°C or rising above 33°C. On average, August is the hottest month of the year, when the average temperature is 27°C, whilst January and February are the coldest months, when the average temperature is just 13°C. The majority of precipitation falls between November and March, with June, July and August remaining entirely bone dry.

The island’s 300 days of sunshine per year and warm average sea temperatures have helped make it the popular tourist destination it is today.

Rhodes, Greece has more than 220km of stunning coastline

Summer is the most popular time to visit Rhodes, when the sun shines for hours on end and temperatures are high. Between June and September, the average temperature for the season is 25.5°C. Average temperatures rise steadily throughout summer, before peaking at 27°C in August (the hottest month of the season). From them on, temperatures start to drop as summer develops into autumn.

There is only a small difference between average highs during the daytime and average highs at night in Rhodes during summer. So if the heat gets a bit too much for you during the day, you won’t get much relief after the sun sets. During this season, average highs rage between a scorching 27°C and 29°C, whilst average lows range between a slightly cooler 21°C and 24°C. However, temperatures can reach into the late 30s in summer, but only if there is a sirocco wind blowing in from the Sahara Desert in North Africa. When this occurs, temperatures usually rise 10°C higher than normal, visibility is seriously reduced and the air feels very dry, which causes breathing difficulties for anyone with respiratory problems. Thankfully, sirocco wind storms rarely last for more than a couple of days, so even if you do suffer one during your holiday in Rhodes, you won’t be put out for long.

Even though nightfall won’t bring much relief, the Meltimi wind will help keep the island relatively cool. This wind prevails between May and October, although it’s strongest between July and September, when its cooling qualities are most needed. The coastal areas are the parts of the island which receive the most benefit from the wind, which loses strength when it travels inland or is blocked by the mountainous terrain. With many of Rhodes’ holiday resorts being located along the coast, there’s a good chance you’ll benefit from it during your visit.

Rainfall is almost unheard of in Rhodes in the summer, with 0mm of precipitation falling between June and August. By September, rainfall increases slightly up to 5mm, but this shouldn’t put you off booking a late summer break to Rhodes, since it’s such a minimal amount.

Source: www.holiday-weather.com
Popular Q&A
Related Posts
Categories
Latest Stories
Average weather in Athens Greece Weather lowdown Although summer in Athens began in June, on average the...
Greece and Turkey Travel Travel on a Rick Steves tour through Greece or Turkey for the very best...
Hotels Resorts in Greece This stunning beach resort is situated in Crete on the Cretan sea. It is...
Island of Rhodes, Greece Loyalty to Sparta ended in 395 BCE when democracy was established on the...
Greece Ridge Center Mall Avis Location Information » 317 Greece Ridge Center Drive Location Contact...
Links How deep is eardrum q tips Why do the tips of my breasts hurt How to clean...
Interesting facts

Qumarlêb County (Tibetan pinyin: ཆུ་དམར་ལེབ་རྫོང; Chinese: 曲麻莱县 is a county in the northeast of the Yushu Tibetan Autonomous Prefecture, south-central Qinghai province, Western China. It is under the administration of Yushu Tibetan Autonomous Prefecture.
With an elevation of around 4,200 metres (14,000 ft), Qumarlêb County has an alpine climate...

City A.M. is a free, business-focused newspaper distributed in and around London in the United Kingdom. It was launched in September 2005 and operates as an independent media company. Its certified distribution was 113,348 copies a day in November 2010, according to statistics compiled by the ABC. Its pagination averages around 32 tabloid...

Zoi City or Hezuo City (Tibetan: གཙོས་གྲོང་ཁྱིར།, ZYPY: Zoi Chongkyir; Chinese: 合作市; pinyin: Hézuò Shì) is the administrative seat of the Gannan Tibetan Autonomous Prefecture in southern Gansu province in Western China. It is home to the Hezuo Monastery and its Milarepa Tower, the Langshangmaio Temple, and a mosque. There is a breed of pig, the...