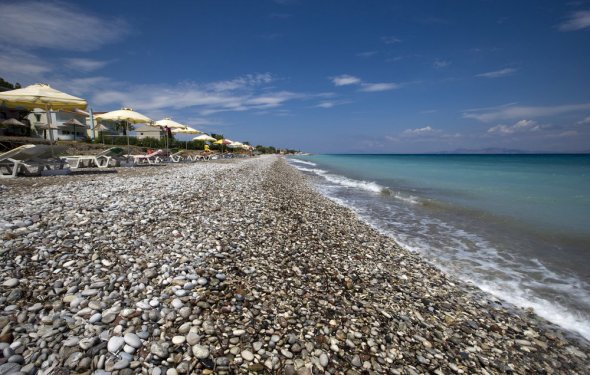 Santorini is an archipelago made up of five volcanic islands which are orientated in a circular shape surrounding a dramatic deep blue ocean lake. Situated in the southern Aegean Sea, Santorini is a member of the Cyclades group of islands and is one of the most spectacular places in the world, matched by equally amazing weather. Located 200km south east from mainland Greece, Santorini enjoys a mild Mediterranean climate with year-round agreeable conditions. Santorini was originally a single island but an enormous underwater volcanic eruption resulted in the creation of geographic calderas which has resulting in a jaw-shaped layout that encompasses a rectangular shaped ocean inlet.

As opposed to the usual four seasons that most countries and islands in Europe receive, the year in Santorini is mainly split into two seasons – summer and winter.

Although the region does get particularly hot in late July and August – which are usually the hottest months of the year – the island is considerably cooler than some of its other Mediterranean counterparts, making it a popular choice for summer holidays. If you want to avoid the throngs of tourists which the summer months attract, it’s best to visit Santorini outside of the school holidays in May or June.

Santorini is one of the most popular tourist destinations in the world so prices can skyrocket come the peak summer season. In addition to the island being less crowded in May and June, you can also enjoy the milder temperatures that they’re known for.

Santorini experiences very little rainfall throughout the year, with the average rainfall levels plummeting down to 0mm in June and August. Rainfall tends to level off toward the end of April and picks up again in October. On average, the wettest month of the year in Santorini during the summer season is March, followed closely by October.

Across the summer months, the average sea temperature for the beaches in Santorini varies greatly from being far too cold to swim in to being just perfect. The sea is at its coldest in March at 16°C, whilst it’s at its warmest at 25°C in August. The best months of the year to go swimming in Santorini are between June and October when the waters are sufficiently warm.

During the summer period the island enjoys an average of nine to 13 hours of sunshine each day. It is when these hours of sunlight are coming to a close in the evening that crowds are drawn from all over the island, to the small cliff-side community of Oia, to watch the spectacular Aegean sunset.

The humidity in the region makes for hazy skies which contribute to this particular sunset being one of the most dramatic in the world. The haze in the sky often prevents a clear view across to nearby Crete which makes you feel as though you are a million miles away from anything.

The sunset is vast and spectacular and is thoroughly enjoyed by tourists and locals who gather together to watch it on the limestone cliffs, in the picturesque Greek houses and from the verandas of the many restaurants and cafes in the area. The constant island breezes provide a welcome break from the high humidity and almost have the affect of negating the humid conditions and leaving you to enjoy the comfortable summer temperatures.

From a tourist’s point of view, anywhere in the Greek Islands becomes a bit of a ghost town during the winter months. This is not necessarily due to poor weather conditions, but partly due to the lack of transportation options during low season. Ferries depart much less regularly with some lines stopping completely. Some parts of the islands shut down entirely, with restaurants and bars closing down for the season and the beaches being left deserted.

Despite this, if you can get out to the islands and are willing to pay the higher travel costs that arise in the off-peak times, you will be met with much cheaper accommodation and leisure costs once you arrive.

The island doesn’t receive heavy rainfall at any point during the year; however December and January are typically the wettest months. On average, Santorini in December receives an average of 74.5mm of rainfall divided between 11 wet days, whilst January is subject to an average of 70.5mm of rainfall which is spread out between ten rainy days.

The weather in Santorini during winter is slightly more unpredictable than in summer, but the skies generally remain blue and the weather remains mild. Humidity is at its highest during winter, averaging at 74%.

Across the winter months, the cold average sea temperature for the beaches in Santorini means that you probably won’t be able to enjoy a swim. The sea is at its coldest at 16°C in January and February, whilst it’s at its warmest at 20°C in November. Everyone feels water temperature differently, so some people might find these temperatures to be refreshing, whereas others will prefer to stick to the indoor and heated swimming pools throughout Santorini.

Throughout this season, the island boasts an average of six to eight hours of sunshine every day. Although this is around half of what you can expect during the summer months, this amount of sunshine is more than enough to be able to explore Santorini and you might get a bit of sunbathing in, too, if the temperatures are warm enough.