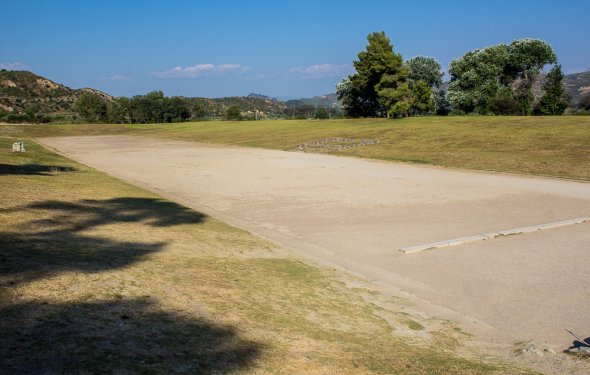 General Information Olympia is the birthplace of the Olympic Games and Zeus' sacred place, Olympia has cultivated ideals since ancient times. It was never just the games, but also the honour, the peace, the struggle and the body - all in one. Visiting the archaeological site and museum, you will walk in one of the most important sanctuaries of ancient Greece. Situated in the landscape of Ilia, by the foot of Mt. Kronion (Kronios Lofos), Olympia invites you to take part of the history of Greece.

Mythology : Olympia is connected to many gods and myths, and there are different versions on how the Olympic Games got started. According to one version, this was where Zeus struggled with his father Cronus, finally beating him and seizing the throne. As a memory of his victory, Zeus made the games.
Another myth tells us that it was the five brothers that brought up Zeus on Crete that started them. They raced in Olympia, and the oldest brother Heracles (not the hero) crowned the winner with an olive wreath.
Yet another story tells us about king Oenomaus of Pisa, whose daughter Hippodameia had reached marrying age. This worried the king, since an oracle had told him that he would die by the hand of his son-in-law, and so he conceived of a wicked plan that would prevent Hippodameia from ever getting married. He made an announcement that any suitor would have to compete with him in a chariot race. If the suitor won, he would get Hippodameias' hand, but if he lost, he would die.
So, the races begun. Despite the risk of losing their life, many suitors challenged the king, not knowing that the evil king had Ares' invincible horses. After Oenomaus had beaten, and killed, 33 suitors, Pelops arrived. As soon as she saw him, Hippodameia fell desperately in love, and conspired with the king's charioteer Myrtilos to help Pelops.
Myrtilos sabotaged the king's chariot by pulling out the bolt that held one of the wheels in its place, and after the race had started the chariot fell apart in the first turn. The king was caught in his horses reins and dragged to death. Pelops and Hippodameia married, and the games were to be held in order to remember the day Pelops won over the sly king.

History: The area of Olympia was already inhabited in the beginning of the 2nd Millennium BC, if not earlier. There was a cult here before Zeus, probably to Gaea.

Tradition holds that the first Olympic Games were held in 776BC, but they might actually have started way before then. The games were a peace treaty between Sparta and Elis, and it was soon decided that all Greek states could take part in them as long as they respected the sacred truce that must be held during the games. This period of peace was for a month at first, but because so many states took part and people from all over came to watch, it was extended to three months, always during summer.

Because the sacred truce gave the kings and leaders from all over Greece a chance to meet unarmed, Olympia became an important place for political discussions and trade. It also enhanced the feeling of unity amongst the Greeks, along with the language and religion.

Olympia was to be renovated many times, and new buildings were added through the ages. Famous people came here to watch the games, such and Plato and Aristotle, and before them, in the 6th century BC, Thales of Miletus had died of a heat stroke here. Gelon and Hieron of Syracusae were to compete in the games, and so was Alcibiades, Alexander the Great and Nero.

Slaves and women, especially married ones, were strictly forbidden to watch the games, and if a woman was caught as a spectator, she was immediately thrown off Mt. Typaeon.Women could compete though, and besides that, the Heraia were also held here; foot races for young maids in the area.

Barbarians were allowed to watch, but not to compete. A competitor had to be a free, unpunished Greek and he had to have trained for the games in his home for ten months, and for one month in Olympia. The winners did not receive any money, but were greatly honored. The prize was an olive wreath from Zeus holy tree, and the winner was allowed to raise a victory statue. In his hometown he would usually be given free meals for the rest of his life, and it is said that a town with a champion would tear down its wall since they no longer needed one with such an athlete as a citizen.

If an athlete was caught cheating, perhaps through bribing or poisoning, he was forced to finance a statue of Zeus where his and his family's name would be put and what he had done. Then the statue was put near the entrance of the stadium, so that the athletes would see them before the games started as a reminder of what could happen.

From the year 472 the games were held during five days in stead of the original one. On the first day the competitors would register...

Museum of Olympia : Just opposite the archaeological site is the museum. It has a big model plan of how the site must have looked in its day, and many interesting artifacts. The best known artworks are the sculpture of Hermes by Praxiteles, Nike of Paionius, Miltiades' helmet and the pediments from the temple of Zeus, picturing the myth of Peleus and Hippodameia on one side, and the myth of Apollo, the Centaurs and the Lapiths on the other. There are also several objects from the actual games - what the athletes would use competing or cleaning themselves, as well as votive offerings that people would dedicate to the gods in order to get cured

Source: www.in2greece.com
Popular Q&A
Related Posts
Categories
Latest Stories
Average weather in Athens Greece Weather lowdown Although summer in Athens began in June, on average the...
Greece and Turkey Travel Travel on a Rick Steves tour through Greece or Turkey for the very best...
Hotels Resorts in Greece This stunning beach resort is situated in Crete on the Cretan sea. It is...
Island of Rhodes, Greece Loyalty to Sparta ended in 395 BCE when democracy was established on the...
Greece Ridge Center Mall Avis Location Information » 317 Greece Ridge Center Drive Location Contact...
Links How deep is eardrum q tips Why do the tips of my breasts hurt How to clean...
Interesting facts