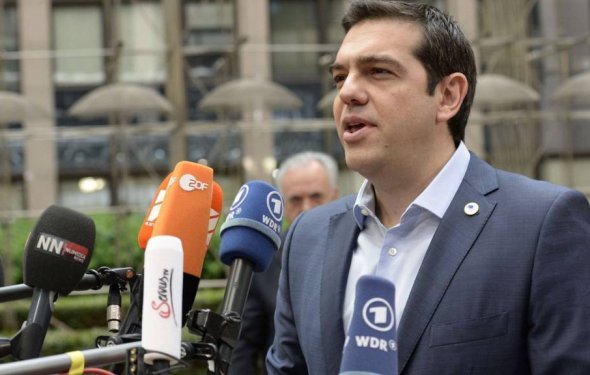 Most people know that the Olympics started out in Ancient Greece, but did you know that back then the athletes competed in the nude? (Though technically, they could wear penis restraints - yes, you read that right). Or that one of the games was an ancient form of mixed martial arts? Or that a chef won the very first Olympic games?

To help celebrate the 2008 Summer Olympic Games, we'll posts some neat facts about the Olympics, starting with this one: 10 Fascinating Facts About the Ancient Olympic Games:

Milo of Kroton, one of the greatest Ancient Olympic champion. He won
the wrestling event 6 times, over the span of 34 years! (Source)

Yes, that's right - ancient Olympic sportsmen (all men, by the way) ran, wrestled, and fought buck naked. The ancient Greeks had a tradition of doing things nude (they walked around in the buff in the bedroom and at parties called sympsia*, and they exercised without any clothes on) - indeed, the word gymnasium came from the Greek word gymos, which means "naked."

Why naked? Well, to appreciate and celebrate the male physique, of course, and as a tribute to the gods. Participants regularly anointed themselves with olive oil to enhance their looks ... and to keep the skin smooth!

In the sixth century, there was an actually attempt to make athletes wear loincloths, but this proved to be unpopular and soon afterwards nudity regained its status as fashion in athletics.

*Great trivia for the next time you're in a boring symposium: the original symposium is a nude drinking party (sympotein is Greek for "to drink together"), complete with courtesans (basically sophisticated prostitutes).

Did I say all athletes competed naked in the Ancient Olympics? Silly me - actually, not all of them were naked.

Some wore a kynodesme (literally a "dog leash"), a thin leather thong used as a penis restraint:

[The kynodesme] was tied tightly around the part of the foreskin that extended beyond the glans. The kynodesme could then either be attached to a waist band to expose the scrotum, or tied to the base of the penis so that the penis appeared to curl upwards.

The very first recorded Ancient Olympic Games took place in 776 BC. The event was a stadion race (a foot race equivalent to a 190-m or 208-yard dash). The winner was a humble baker from the Greek city state of Elis named Coroebus (also spelled Koroibos).

For the first 13 games, the stadion race was the only competition. At the 14th Ancient Olympic Games, a double race was added.

An Olympionike or a winner of an event receiving an olive wreath and red ribbons
(Epiktetos Painter, 520 - 510 BC - from mlahanas.de)

Yup - that's because the Ancient Olympic Games didn't have any medals or prizes. Winners of the competitions won olive wreaths, branches, as well as woolen ribbons. Oh, that and the all important honor.

They did, however, come home as heroes - and got showered with gifts there. Many victors subsequently used their fame to endorse products and to get paid posing for sculptures and drawings (just like today, huh?)

5. More than Just Running: Wrestling and Boxing Added to the Ancient Olympics

Tired of all the running, a new game of wrestling (called pale) was added to the 18th Olympics in 708 B.C.

Greek wrestling was a bit more fun than your regular high school wrestling. For one, submission holds were allowed (actually, they were encouraged) and that a referee could punish an infraction by whipping the contestant with a stick until the undesirable behavior stopped!

Later, pygme/pygmachia or Ancient Greek boxing was added. Now, some historian believed that boxing was originally developed in Sparta. Being the original tough guys, Spartans believed that helmets were unnecessary in battle. Instead, they boxed themselves in the face to prepare for battles!

In the Ancient Olympics, there were no rounds - boxing was done when a fighter was knocked out cold (if the fight lasted too long, then they each took turn punching each other in the head until one collapsed).

In this Pankration scene, the pankriatiast on the right is trying to gouge his opponent's eye and the ref is about to beat the living tar out of him with a stick
(Photo: Jastrow [Wikimedia])

If you think that Ancient Greek boxing was violent, it's more like knitting when compared to pankration, the ancient form of mixed martial arts.

How violent was pankration? Let's just say that there were only two rules: no eye gouging and no biting (the referees carried sticks to beat those who violated the rules). Everything else - including choke holds, breaking fingers and neck - was legit. There was no weight division or time limits: the fight continued until a combatant surrendered, lost consciousness, or died.

In 564 BC, Arrhachion of Philgaleia was crowned the pankration victor ... even after he had died:

Arrhachion's opponent, having already a grip around his waist, thought to kill him and put an arm around his neck to choke off his breath. At the same time he slipped his legs through Arrhachion's groin and wound his feet inside Arrhachion's knees, pulling back until the sleep of death began to creep over Arrhachion's senses. But Arrhachion was not done yet, for as his opponent began to relax the pressure of his legs, Arrhachion kicked away his own right foot and fell heavily to the left, holding his opponent at the groin with his left knee still holding his opponent's foot firmly. So violent was the fall that the opponent's left ankle was wrenched from his socket. The man strangling Arrhachion ... signaled with his hand that he gave up. Thus Arrhachion became a three-time Olympic victor at the moment of his death. His corpse ... received the victory crown. (Source)

What is the latest news about beyonce?

Well, there was a rumor that she was pregnant, but that is not true. She said she would love to have kids.

What are the latest news about environment.

As of July 15, 2013, the latest news on the environment is that temperatures are much higher than normal which may be a result of global warming. It is believed that if this continues, the overall climate of the world may change drastically.

What is the latest news out of Greece regarding a gunman.

A Greek student has died after shooting a fellow student and two passers-by at his college in Athens before shooting himself.