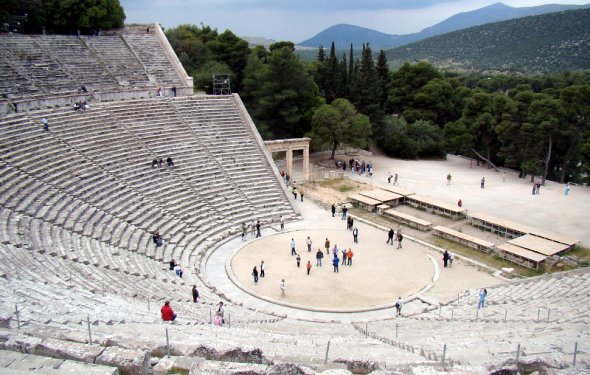 It has been a challenge for historians and archaeologists to piece together the history of Ancient Greece. Part of the problem is that there weren’t many known historians. Three of the most well-known were Herodotus, Thucydides, and Xenophon. Besides what they were able to report, all we know has been uncovered in temples, archaeological sites, and through sculptures, pottery, and other artifacts.

So, what was Ancient Greece like? In order to truly understand what Ancient Greece was like, it helps to get an overview of the time periods, starting with the Neolithic Period and ending with the Hellenistic Period. Here’s the overview.

During this period, the inhabitants initially came to Ancient Greece from the East and they settled in the eastern portion of the region. Once these eastern settlements increased in population, the people scattered and traveled throughout Greece. They introduced pottery to Greece and began raising animals domestically.

This civilization took place primarily on Crete. One of the best remnants of this civilization is the Palace of the Knossos near Heraklion on the island of Crete. The Minoans were perhaps most well known for their pottery and sculpture. They were a peaceful society who were also devoted to the arts.

It is during this period that the culture of Ancient Greece truly started to develop, most especially the art and sculpture. They were successful builders and engineers and specialized in bridges, buildings, and palaces. Several important industries were in place such as the textile industry. In addition, the class structure developed even further.

In The Dark Ages, Ancient Greece was depleted by war and eventually invasion by the Dorians. After the Trojan War the Mycenaeans began a Civil War. Depleted from war, this gave the Dorians a chance to take over.

The Archaic Period was most noted for the development of the arts even further, particularly through pottery and sculpture. Political theory also had its roots here as well as the idea of democracy. This idea was developed even further in the Classical Period.

This was a thriving era in Ancient Greek history. One of the most important developments was the full creation and implementation of the democratic system. This era also saw the building of the Parthenon and conflict with neighboring empires such as the Persian Empire.

As you can see, this time period doesn’t span a large time period. Greek culture was further shaped during this time and the people valued learning. This is the short time period between when Alexander conquered the Persian Empire.

ancient Greece existed in the late 1500's thriugh the 1700's and many people enjoyed their lives there.

Was Ancient Rome in the same time period as Ancient Greece?

Some of it was yes, Ancient Greece could have started a bit earlier than Rome, but Ancient Rome lasted for nearly 900 years longer.

Ribbon Hero 2: Clippy's Second Chance is a video game developed by Microsoft Office Labs. The game is available as a free download and serves to educate users of Microsoft Word, Excel, PowerPoint and OneNote in Microsoft Office 2007 and 2010 how to use the ribbon interface. It follows the previous/first game, Ribbon Hero.
Clippy, one of the...

The following outline is provided as an overview of and topical guide to classical studies:
Classical studies (Classics for short) – earliest branch of the Humanities, which covers the languages, literature, history, art, and other cultural aspects of the ancient Mediterranean world. The field focuses primarily on, but is not limited to...

Ancient history is the study of the written past from the beginning of recorded human history to the Early Middle Ages. The span of recorded history is roughly 5,000 years, with Cuneiform script, the oldest discovered form of coherent writing, from the protoliterate period around the 30th century BC. This is the beginning of history, as opposed...