Rise and Fall of Ancient Greece 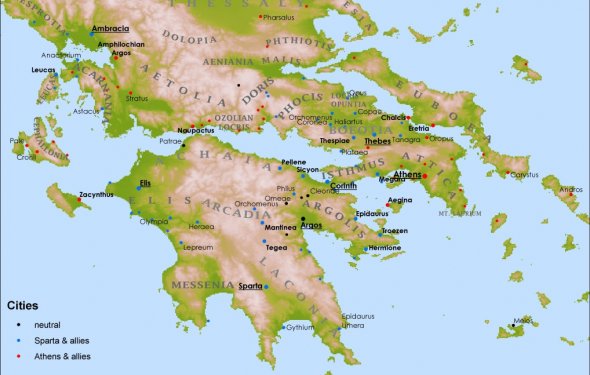 Josiah Ober is the Mitsotakis Professor of Political Science and Classics at Stanford University. He is also the author of a new book from Princeton University Press, “The Rise and Fall of Classical Greece, ” which seeks to uncover the reasons Classical Greece was so extraordinary, creating ideas and ways of doing things that still influence our world today. I interviewed him about his book over e-mail.

HF: Historians used to think about the classical Greek world of city-states as relatively impoverished. In fact, it seems to have supported a far higher standard of living than the empires around it. Why were the city-states of Greece more prosperous than their competitors?

JO: The Greeks tended to describe themselves as “poor” in contrast to the opulent lives of ruling elites in neighboring kingdoms – Lydia, Egypt, and especially Persia. But even taking slaves into account, it appears the average Greek lived very well – consuming several times the minimum needed to survive, at roughly twice the level of consumption that appears to be typical of premodern societies.

Interestingly, there is no evidence to suggest that Greece did unusually well either before or after the city-state era. This suggests that the primary driver of ancient Greek prosperity can be sought in political institutions (and informal norms of behavior) centered around citizenship. These included relatively fair laws, and open access to institutions for citizens (and, in some cases, certain non-citizens), which protected the bodies, property and dignity of individual Greeks from the depredations of powerful private individuals. These conditions gave people more reason to invest in human capital, to specialize in certain kinds of production, and to identify and develop comparative advantages in production and distribution of goods.

HF: Unlike Persia, which was ruled by a Great King and satraps (sub-rulers) who were at least nominally responsible to him, the Greek world was a decentralized ecology of many different independent cities, some large and some small, some democratic, and some ruled by narrow self-perpetuating elites. How did this decentralized ecology encourage innovation, and spread it from city to city?

JO: There were many differences of climate and natural resources (such as metals and timbers) across the Mediterranean world of the Greeks. It was a world where relatively small states competed intensely, but shared an “umbrella culture” of common language, religion, and other cultural features.

Resource diversity rewarded local specialization and encouraged trade. Competition drove innovation in many fields, including technology and institutional design. The shared culture lowered transaction costs, which meant that goods and ideas moved quickly across the ecology of states.

Meanwhile, there was no imperial government or central ruling elite with an incentive or capacity to discourage change. Given the level of inter-state competition and the high stakes of failure, there was considerable pressure for states to adopt technologies and institutions that offered competitive advantages. Valuable techniques and institutions that spread very quickly included hoplite (heavy infantry) warfare, state-issued coinage, written law, democracy and federalism.

HF: How did equality among citizens become established as a norm among Greek city states, and why did it survive for so long?

JO: In the Bronze age of the mid-second millennium BCE, Greek societies were organized in ways that resembled the kingdoms of the ancient Middle East. Economy, society, and war-making were centered on royal palaces, controlled by a “god-like” king and a coalition of elites around him. These societies were very unequal; the elite lived much better than the common people (as has been demonstrated by skeletal analysis of diets).

In the Greek world this palace-centered world collapsed around 1100 BCE, in a “perfect storm” of climate change, volcano activity and migration. Greece lost perhaps half of its population; survivors lived in small, poor villages. The kings disappeared, along with the bureaucracies that had supported them.

Post-collapse Greek communities were relatively equal by necessity: there was little surplus to distribute. As Greece emerged from the post-collapse era, and villages coalesced into city-states, some communities resisted the rise of elite coalitions, seeking to retain a culture of equal standing among native adult men. More equal societies were better able to adapt because they could mobilize more fighting men with high morale. It’s easier to win infantry (and later naval) battles if you can put more men in the field. Meanwhile, innovative institutions such as written law, citizen councils and assemblies, accountability, and federalism solved collective action problems, making it possible to scale up citizen-centered government. Athens and Sparta are examples of states that were particularly innovative and successful in designing new citizen-centered institutions.

HF: What were the reasons for the eventual decline and eclipse of the vibrant ecology of Greek city states in the late classical and Hellenistic period, when Philip of Macedon and his son Alexander the Great succeeded in dominating Greece and the former Persian empire?

JO: The period after the Peloponnesian war (the great conflict between Athens, Sparta and their allies) saw expertise growing in military technology (fortifications, artillery) and the state financing tools needed to pay for them. Greek experts were highly mobile, and their skills were “disembedded” – that is, the essential techniques could be reproduced in different cultures than those where they had been developed. Ruling elites in larger states on the fringes of the Greek world – in Cyprus, western Anatolia, Thessaly, as well as Macedon – became increasingly Hellenized (influenced by Greece), and fluent in Greek language and some aspects of Greek culture. Talented and ambitious leaders of those states hired Greek experts: Aristotle was, famously, brought to Macedon to tutor young Alexander III (later Alexander the Great).

Greek experts proved to be exactly what Hellenized dynastic rulers needed to push state capacity to the next level. Philip and Alexander of Macedon were successful at least in part because they were intensely focused on recruiting Greek military and financial expertise and adapting it to their own purposes. So the Greek city-states (along with the Persian Empire) fell victim to their own success in producing and distributing useful innovations.

It is, however, wrong to think that the rise of Macedon meant the collapse of Greece. The “fall” was political, in that city-states were no longer the primary drivers of Mediterranean history. But the well-fortified cities of Greece, which were well defended by citizen-soldiers, proved to be hard targets. Alexander’s successors were forced to negotiate non-extortionate tax rates, which in turn sustained a vibrant Greek economy after the political fall. Eventually, however, the Roman Empire terminated egalitarian Greek citizen governments, precipitating a long economic decline.

Ancient Rome: The Rise and Fall of an Empire (Episode 10 ...

Ancient History Documentary: The Rise and Fall of the ...
Popular Q&A

Where their particular event of rise and fall in ancient Greece?

The precident is the one to ask

Rome conquered Greece and defeated the Spartans in 195 B.C.

Greek religion encompasses the collection of beliefs and rituals practiced in ancient Greece in the form of both popular public religion and cult practices. These different groups varied enough for it to be possible to speak of Greek religions or "cults" in the plural, though most of them shared similarities. Also, the Greek religion extended...

Greek mythology is the body of myths and legends belonging to the ancient Greeks, concerning their gods and heroes, the nature of the world, and the origins and significance of their own cult and ritual practices. They were a part of religion in ancient Greece and are part of religion in modern Greece and around the world as Hellenismos. Modern...

Religion in ancient Rome encompasses the practices and beliefs the ancient Romans regarded as their own, as well as the many cults imported to Rome or practiced by peoples under Roman rule.
The Romans thought of themselves as highly religious, and attributed their success as a world power to their collective piety (pietas) in maintaining good...