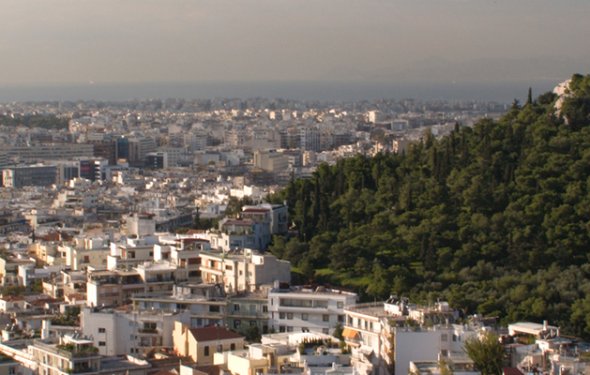 Where Antiquity And Modern Life Collide: The Acropolis rises above Athens, Greece, the city at the center of writer Petros Markaris' Inspector Costas Haritos crime series. While many view Athens as the birthplace of democracy, Markaris says that to him the city also showcases the uglier side of modern society. Petros Giannakouris/AP hide caption

For millions of tourists who flock to Athens every year, the city at the foot of the Acropolis represents the cradle of democracy and the sublime art of antiquity.

But to crime writer Petros Markaris, the Athens of today is both a peaceful Balkan haven and a symbol of the ugliness of modern, corrupt societies. In his detective novels, he takes on the financial and social crises sweeping Greece.

The city itself is a central character in his novels. The Monastiraki, bustling with colorful street stalls and old-fashioned shops, is one of Athens' oldest parts. It's also one of Markaris' favorite places.

Athens' Monastiraki neighborhood is a meeting place for Greek and Ottoman culture. Case in point: the 18th-century Tzistarakis Mosque (left) sits below the Acropolis (center) and serves as a focal point for Monastiraki Square. Julian Finney/Getty Images hide caption

Athens' Monastiraki neighborhood is a meeting place for Greek and Ottoman culture. Case in point: the 18th-century Tzistarakis Mosque (left) sits below the Acropolis (center) and serves as a focal point for Monastiraki Square.

"It still has some of the oriental. You still smell the spices. . This is the part of the town where ancient Greece and the Ottoman Empire meet, " Markaris says.

But the author acknowledges his love-hate relationship with Athens as he describes the modern city of more than 5 million people as seen from the top of Lycabettus Hill.

"What do you see? Something like hell. Everything built without any planning, without any controls, with nothing. And in between you see the streets with some insects going slowly along, " he says.

The writer says it's as if the city is shouting at him, "Are you crazy? Get out of here."

"But if you don't listen to the voice, and if you stay, then you will discover the small miracles of the city, " Markaris says.

It's in search of those small, quiet miracles that the character Costas Haritos, a police inspector, spends many hours in his car battling Athens' notorious traffic and its polluted and clogged roadways. Markaris' books are filled with the names of streets and squares; he's been hailed as the master writer of traffic jams.

Born in Istanbul in 1937 to a Greek-Armenian family, Markaris studied economics in Vienna and speaks several languages. When he decided to become a writer, he chose Greek as his creative tool. And he made Athens his home in 1965.

He has written plays for the theater, scripts for movies, and poetry.

Then he decided to write about contemporary Greek society.

"You want to write today a social or political novel, you have to turn to the crime novel, " he says.

Petros Markaris (shown here in 2009) uses his detective novels, featuring Inspector Costas Haritos, to explore the social, economic and political issues of modern Greece. The Istanbul-born writer says that his detached way of observing Greece and the Greeks is a trait he shares with Haritos, his character. Evandro Inetti/ZUMA Press hide caption

Inspector Haritos first appeared in Late-Night News (known as Deadline in Athens in the U.S.), which was published in Greece in 1995. The character was a challenge for Markaris, a writer with left-wing sympathies. In the Balkans, he says, especially in countries such as Greece that have had dictatorships, policemen are seen as fascists.

"So when I decided that Haritos was my character, I said, 'How can I write about a right-wing policeman when I hate him?' " Markaris recalls.

He decided to take the character's uniform off, and what he found was very familiar.

"What I discovered was somebody like the people in my family, and this helped me to come very close to this character. Now we are best friends, but it took some time, " Markaris says.

To further humanize Haritos, Markaris took a real anecdote he was told by a man who had been imprisoned during Greece's junta years, from 1967 to 1974.

0669b The Parliament Building in modern Athens, Greece

First, Greek democracy was a direct democracy, all men who owned land had a position in government, where as in the United States we have a representative democracy.
Second, In the US there are three branches of government:

where is "Sparta" on the modern map of Greece, I only see "Athens"? | Yahoo Answers

The city was reestablished by the order of the Greek King Otto in 1834, it is now called "Sparti."
Edit:
To answer the real question that seems to be going on here, no Athens did not beat Sparta.
I'm guessing that you're talking about the wars between Athens and Sparta over 2000 years ago, and Sparta actually won those. They didn't destroy Athens. Sparta was actually destroyed several hundred years later, closer to the time of Rome, but it wasn't by the Athenians.
Athens actually was burned by the Persians long before Sparta was destroyed, they just rebuilt it.…

Interesting fact
The vehicle transport service will perform careful inspection of your car for determination of damage. It is important for the owner to be present during survey and take photos of the car (inside and outside) to write down its condition before auto shipping. Such process is helpful in case of any damages, made during transportation by carrier, who is responsible for safe delivery.

Athens (/ˈæθɨnz/; Modern Greek: Αθήνα, Athína; IPA: [aˈθina]; Katharevousa: Ἀθῆναι, Athine; Ancient Greek: Ἀθῆναι, Athēnai) is the capital and largest city of Greece. Athens dominates the Attica region and is one of the world's oldest cities, as its recorded history spans around 3,400 years. Classical Athens was a powerful city-state. A centre...

The National and Kapodistrian University of Athens (Greek: Εθνικόν και Καποδιστριακόν Πανεπιστήμιον Αθηνών), usually referred to simply as the University of Athens, has been in continuous operation since its establishment in 1837. Today, it is the second-largest institution of higher learning in Greece, with more than fifty thousand...

The culture of Greece has evolved over thousands of years, beginning in Mycenaean Greece, continuing most notably into Classical Greece, through the influence of the Roman Empire and its Greek Eastern successor the Byzantine Empire. Other cultures and states such as Latin and Frankish states, the Ottoman Empire, the Venetian Republic, Genoese...