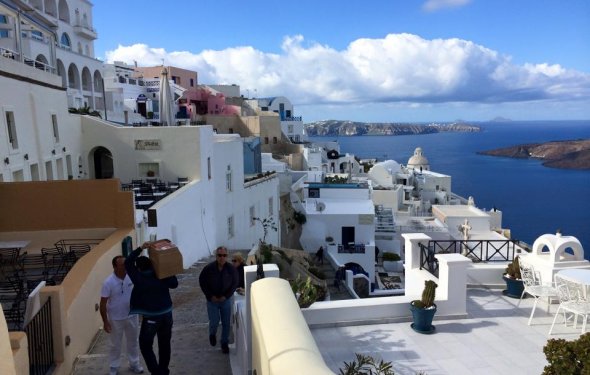 Cousteau looked for the lost city of Atlantis here. On Santorini

Crescent-shaped Santorini (or Thíra), the precious gem of the Aegean, is actually a group of islands consisting of Thíra, Thirassiá, Asproníssi, Palea and Nea Kaméni in the southernmost part of Cyclades.

Did you know that the whole complex of Santorini islands is still an active volcano (the same as Méthana, Mílos and Nísiros) and probably the only volcano in the world whose crater is in the sea? The islands that form Santorini came into existence as a result of intensive volcanic activity; twelve huge eruptions occurred, one every 20, 000 years approximately, and each violent eruption caused the collapse of the volcano’s central part creating a large crater (caldera). The volcano, however, managed to recreate itself over and over again.

The last big eruption occurred 3, 600 years ago (during the Minoan Age), when igneous material (mainly ash, pumice and lava stones) covered the three islands (Thíra, Thirassiá and Asproníssi). The eruption destroyed the thriving local prehistoric civilization, evidence of which was found during the excavations of a settlement at Akrotíri.

The solid material and gases emerging from the volcano’s interior created a huge “vacuum” underneath, causing the collapse of the central part and the creation of an enormous “pot” –today’s Caldera– with a size of 8x4 km and a depth of up to 400m below sea level.

The eruption of the submarine volcano Kolúmbo, located 6.5 km. NE of Santorini, on 27th September 1650, was actually the largest recorded in Eastern Mediterranean during the past millennium! The most recent volcanic activity on the island occurred in 1950. The whole island is actually a huge natural geological/volcanological museum where you can observe a wide range of geological structures and forms!

• Searching for romance
Santorini is considered to be the most sought after place for a romantic getaway in Greece, since there are not many places in the world where you can enjoy exquisitely clear waters while perched on the rim of a massive active volcano in the middle of the sea! The island has a growing reputation as a “wedding destination” for couples not only from Greece but from all over the world. A trip to Santorini with the other half is a dream for anyone who has seen at least one photo of the island’s famous Caldera and exchanging kisses beneath Santorini’s famous sunset is the ultimate romantic experience!

• Explore the island’s towns
Firá is the picturesque capital of the island; perched high up on the edge of the Caldera, it looks like a marvellous painting. Firá, together with Oia, Imerovígli and Firostefáni located high above on a cliff, make up the so-called “Caldera’s eyebrow”, the balcony of Santorini, which offers an amazing view of the volcano. Other famous smaller villages are Akrotíri and Méssa Vounó, with their famous archaeological sites, Pýrgos, Karterádes, Emporió, Ammoúdi, Finikiá, Períssa, Perívolos, Megalohóri, Kamári, Messariá and Monólithos: some of the villages are cosmopolitan some more peaceful; they are surrounded by vast vineyards; whitewashed cliff-top towns with castles affording amazing views out over the Aegean. Soaking up the villages’ distinctive traditional atmosphere is a very rewarding experience.

A visit to Santorini is the ultimate gastronomic experience, as the island is a true culinary paradise! Treat your taste buds to some famous traditional products like cherry tomatoes, white egg plants, fava, caper and “hloró tyrí”, a special kind of fresh goat cheese found on the island, or why not try some of the exceptional wines produced from grapes grown in the volcanic soil of the island! Assyrtiko, Athyri, Aidani, Mantilaria and Mavrotragano are just some of the distinctive varieties that you can taste at the island’s famous wineries (some of them operate as a museum as well) or at restaurants.

• Head to volcanic beaches
Venture into Santorini’s seaside treasures and enjoy deep blue waters and beaches with white, red or black sand or volcanic pebbles, spectacular rock formations and impressive lunar landscapes.
Santorini, the youngest volcanic land in the Eastern Mediterranean, is waiting for you! You can reach it by plane or by ship from Piraeus. Don’t think twice! Experience for yourself the once-in-a-lifetime romance and charm of this pearl of the Aegean.

Francesco da Mosto continues his sea tour around the Mediterranean from Venice to Istanbul by visiting the magical, mystical Greek islands known as the Cyclades.
First stop is the most sacred island of all, Delos, the birthplace of the god Apollo. Francesco encounters the lions of Delos and the great phalli of Dionysus.
On Tinos, a place of...