Weather in Santorini Greece in October 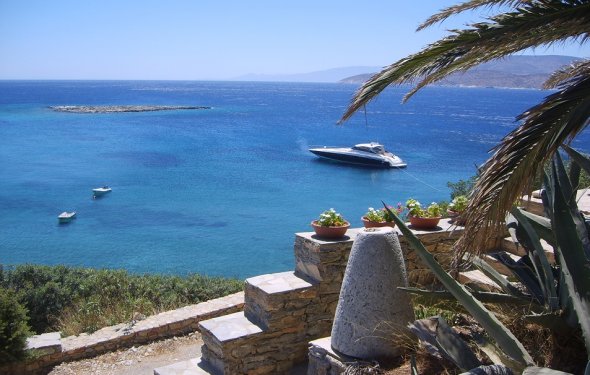 Averages for Santorini in October

October is a great time of year to visit Santorini, Greece, when the weather is superb and the island is relatively quiet. During this month, the temperatures are pleasantly mild, as is the average sea temperature which retains the heat from summer. Although the chance of rainfall is slightly increased from September, it’s not so much that it should spoil your holiday in October. If you’re not bothered about the quieter atmosphere and want to take advantage of cheap prices, October is a great month to visit Santorini.

At this time of year, the average temperature for the island starts off at 22°C on October 1st and gradually drops down to 18°C by October 31st. Daily highs and daily lows change in the same way, falling from 25°C to 20°C and from 19°C to 16°C, respectively, as the month develops.

With average temperatures like this, you’ll need to bring a mixture of cool and warm clothing in order to stay comfortable whilst on holiday. Make sure you bring plenty of light and airy clothing, beachwear and swimming gear for during the daytime, as well as a thin jacket in case its especially cold on an evening. Whatever the weather forecast is, remember to bring enough suntan lotion and a pair of sunglasses so your holiday isn’t ruined by heatstroke or sunburn.

Throughout the month, Santorini receives an average of 38mm of rainfall – that’s significantly more than in September. Despite the increase in rainfall, the island is only subject to around four rainy days in October, which means the chance of you experiencing a shower or two during your holiday is quite low.

Across the month, Santorini boasts an average of nine hours of sunshine each day – that’s two hours less every day than in September. In spite of the decrease in sunshine hours, you’ll still have more than enough time to work on your tan by the pool or at the beach during your holiday.

If a day at the beach sounds like just what the doctor ordered, you’ll be pleased to hear that the average sea water temperature for the beaches in Santorini is 23°C in October – that’s 1°C cooler than in September. This temperature is perfect for swimming, snorkelling, scuba diving and all sorts of water sports, which is why you’ll see so many people on the beaches at this time of year.

Across the month, the relative humidity for Santorini fluctuates between 57% (mildly humid) and 85% (very humid) rarely falling below 45% (comfortable) or rising up to 95% (very humid). On average the driest day of the month is October 1st, when the average daily humidity falls below 63% three days out of every four. At the other end of the scale, the most humid day of the most is often October 3rd, when the average daily humidity rises above 81% three days out of every four.

Santorini trip 2013
Related Posts
Categories
Latest Stories
Average weather in Athens Greece Weather lowdown Although summer in Athens began in June, on average the...
Greece and Turkey Travel Travel on a Rick Steves tour through Greece or Turkey for the very best...
Hotels Resorts in Greece This stunning beach resort is situated in Crete on the Cretan sea. It is...
Island of Rhodes, Greece Loyalty to Sparta ended in 395 BCE when democracy was established on the...
Greece Ridge Center Mall Avis Location Information » 317 Greece Ridge Center Drive Location Contact...
Links How deep is eardrum q tips Why do the tips of my breasts hurt How to clean...
Interesting facts

The Kenosha News is a morning daily newspaper published in Kenosha, Wisconsin, USA, serving southeastern Wisconsin and northeastern Illinois. It is the original and flagship property of United Communications Corporation.
The News also prints a 48,000-circulation Kenosha weekly newspaper, The Bulletin; a shopper, the Bargaineer; and an Illinois...

InciWeb is an interagency all-risk incident web information management system provided by the United States Forest Service released in 2004. It was originally developed for wildland fire emergencies, but can be also used for other emergency incidents (natural disasters, such as earthquakes, floods, hurricanes, tornadoes, etc.).
It was developed...