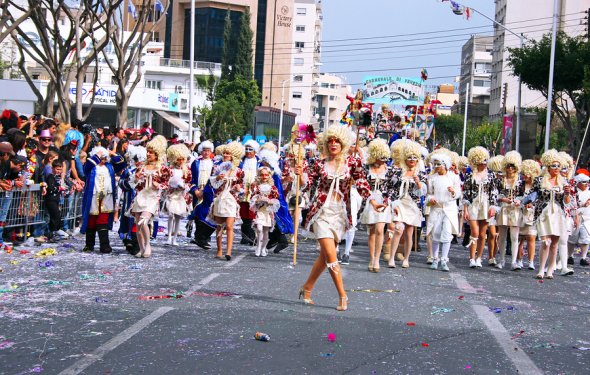 Customs and traditions in Greece and the Greek Islands one important aspect of the Greek culture. There are either of a religious character or coming from paganism. Furthermore, most of the traditions and festivals still celebrated today are religious.

The Greeks are very superstitious and believe a lot in religion but also in supernatural or paranormal phenomenon. Traditions and superstitions vary from island to island, from villages to villages and from region to region.

You will find bellow the many Greek traditions still honoured in Greek modern culture, no matter people's age, until today.
After reading about the traditions, get also informed about the .

Most Greeks are named after a religious saint. A very important tradition is that everyone who has a name coming from a saint celebrated by the church celebrates his name on a given day of the year. On the "name day" of someone, his friends and family visit him without invitation and offer wishes and small presents. The hostess of the house offers pastries, sweets and hors d'oeuvres to the guests. In Greece, name days are more important than birthdays.

It is a custom in Greece to get engaged before get married. The man has to ask for the hand of the woman from her father and close family, while the two families give presents to bride and groom. The couple exchanges wedding rings that are worn on the left hand. After the wedding, these rings will be worn on the right hand. In Greece, the engagement period may last for years and it is like a commitment to the families. This custom is still vivid in the Greek mainland, while gradually it tends to disappear.

In Greece, the Carnival is called "Apokries". The festival consists of two weeks of feast, beginning from the Sunday of Meat Fare and ends with the first day of the Lent, called Clean Monday (Kathari Deutera). Everyone is costumed and parties take place in the streets and bars, throwing coloured confetti to each other. The most famous Carnival Parade takes place in the city of Patra. In many towns around Greece and in the islands, local customs revive. The Carnival is believed to come from paganism, and more precisely from the old festivities worshiping Dionysus, the god of wine and feast.

Clean Monday or Lent Monday is the first day of the Lent (Saracosti) during which families go for a picnic in the countryside and fly kites.

Easter is the most important celebration for the Greeks, even more than Christmas. On Good Thursday or Good Saturday, women dye eggs in red and bake buns. On Good Friday, the day of mourning, the Epitaphios, the tomb of Christ with its icon, decorated with flowers, is taken out of the church and carried around the village followed by a slow procession. After the procession returns to the church where the believers kiss the image of the Christ.

During the night of the Holy Saturday (Megalo Savato), everybody dresses well and goes to the church where a ceremony is hold. Just before midnight, all of the lights of the church are turned off, symbolizing the darkness and silent of the tomb, while the priest lights a candle from the Eternal Flame, sings the psalm Christos Anesti (meaning Christ has risen) and offers the flame to light the candles of the people. Everyone passes the flame one to another. The bells ring continuously and people throw fireworks. The Good Saturday Dinner takes place after midnight and consists of mayiritsa, tsoureki (Easter cake) and red eggs. On Easter Sunday, the family roasts the lamb on the spit.
Corfu island is the most famous place for easter.

On October 28th, the Greeks celebrate the day when the Greek dictator Metaxas refused to let the Italians invade the country during World War II. It is the celebration of the heroic OXI (NO): most Greeks put a Greek flag on their windows and balconies, while a parade takes place with the participation of school students and the army.

Greek superstitions are coming either from religion or paganism. They vary from region to region.

Some Greeks, especially in villages, believe that someone can catch the evil eye, or matiasma, from someone else's jealous compliment or envy. A person who has caught the evil eye usually feels bad physically and psychologically. In this case, an expert in xematiasma must tell a special pray to release the person in pain from the bad effects of the evil eye.

To avoid the matiasma, those who believe in it wear a charm, a little blue bead with an eye painted on it. Blue is believed to be the colour that wards off the evil eye, but it is also believed that people with blue eyes are most possible givers of the matiasma.

It is believed that spitting chases the devil and the misfortune away. That is why when someone talks bad news (deaths, accidents, etc), the others slightly spit three times saying ftou, ftou, ftou. Another example is that someone that compliments a baby, a child or even an adult for its beauty, has also to spit three times on the complimented person so that he doesn't give him the bad eye (mati).

The hobgoblins are known as kallikantzari in Greek. According to the folk Christmas traditions, the hobgoblins are short, ungly creatures with many deformities. All year round, they live underground and saw the tree of the year. From Christmas until the Epiphany Day (January 6th), they come up to the world and tease people with many pranks. On the Epiphany Day, the priest of the village goes from house to house and sprinkles the rooms with blessed water so that the hobgoblins return underground.

Unlike the western belief, in Greece the unlucky day is Tuesday the 13th and not Friday the 13th.

When two people say the same thing together at the same time, they immediately say piase kokkino (touch red) one to another and both have to touch any red item they can find around them. This happens because Greeks believe that saying the same thing is an omen and that the two persons will get into a fight or an argument if they don't touch something red.

What were the customs on worshiping a god in ancient Greece?

The sacrifice played an important role in Greek religious devotion, which was practiced and repeated more than once a day.

Hippocrates of Cos or Hippokrates of Kos (Ancient Greek: Ἱπποκράτης; Hippokrátēs; c. 460 BC – c. 370 BC) was an ancient Greek physician of the Age of Pericles (Classical Athens), and is considered one of the most outstanding figures in the history of medicine. He is referred to as the father of Western medicine in recognition of his lasting...

Women have made contributions and sacrifices to science from the earliest times. Historians with an interest in gender and science have illuminated the scientific endeavors and accomplishments of women, the barriers they have faced, and the strategies implemented to have their work peer-reviewed and accepted.
The involvement of women in the...

Neophytos Doukas (Greek: Νεόφυτος Δούκας; 1760, Ano Soudena, Ottoman Empire - 1845, Athens, Greece) was a Greek priest and scholar, author of a large number of books and translations from ancient Greek works, and one of the most important personalities of modern Greek Enlightenment (Diafotismos) during the Ottoman occupation of Greece. His...