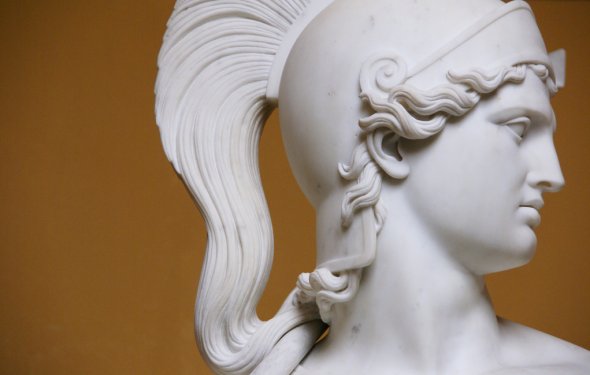 The earliest large stone figures (kouroi - nude male youths and kore - clothed female figures) were rigid as in Egyptian monumental statues with the arms held straight at the sides, the feet are almost together and the eyes stare blankly ahead without any particular facial expression. These rather static figures slowly evolved though and with ever greater details added to hair and muscles, the figures began to come to life. Slowly, arms become slightly bent giving them muscular tension and one leg (usually the right) is placed slightly more forward, giving a sense of dynamic movement to the statue. Excellent examples of this style of figure are the kouroi of Argos, dedicated at Delphi (c. 580 BCE). Around 480 BCE, the last kouroi become ever more life-like, the weight is carried on the left leg, the right hip is lower, the buttocks and shoulders more relaxed, the head is not quite so rigid, and there is a hint of a smile. Female kore followed a similar evolution, particularly in the sculpting of their clothes which were rendered in an ever-more realistic and complex way. A more natural proportion of the figure was also established where the head became 1:7 with the body, irrespective of the actual size of the statue. By 500 BCE Greek sculptors were finally breaking away from the rigid rules of Archaic conceptual art and beginning to re-produce what they actually observed in real life.

Greek sculptors would strive to glorify the human body in marble and bronze.

In the Classical period, Greek sculptors would break off the shackles of convention and achieve what no-one else had ever before attempted. They created life-size and life-like sculpture which glorified the human and especially nude male form. Even more was achieved than this though. Marble turned out to be a wonderful medium for rendering what all sculptors strive for: that is to make the piece seem carved from the inside rather than chiselled from the outside. Figures become sensuous and appear frozen in action; it seems that only a second ago they were actually alive. Faces are given more expression and whole figures strike a particular mood.

Clothes too become more subtle in their rendering and cling to the contours of the body in what has been described as ‘wind-blown’ or the ‘wet-look’. Quite simply, the sculptures no longer seemed to be sculptures but were figures instilled with life and verve.

To see how such realism was achieved we must return again to the beginning and examine more closely the materials and tools at the disposal of the artist and the techniques employed to transform raw materials into art.

Early Greek sculpture was most often in bronze and porous limestone, but whilst bronze seems never to have gone out of fashion, the stone of choice would become marble. The best was from Naxos - close-grained and sparkling, Parian (from Paros) - with a rougher grain and more translucent, and Pentelic (near Athens) - more opaque and which turned a soft honey colour with age (due to its iron content). However, stone was chosen for its workability rather than its decoration as the majority of Greek sculpture was not polished but painted, often rather garishly for modern tastes.

Marble was quarried using bow drills and wooden wedges soaked in water to break away workable blocks. Generally, larger figures were not produced from a single piece of marble, but important additions such as arms were sculpted separately and fixed to the main body with dowels. Using iron tools, the sculptor would work the block from all directions (perhaps with an eye on a small-scale model to guide proportions), first using a pointed tool to remove more substantial pieces of marble. Next, a combination of a five-claw chisel, flat chisels of various sizes, and small hand drills were used to sculpt the fine details. The surface of the stone was then finished off with an abrasive powder (usually emery from Naxos) but rarely polished. The statue was then attached to a plinth using a lead fixture or sometimes placed on a single column (e.g. the Naxian sphinx at Delphi, c. 560 BCE). The finishing touches to statues were added using paint. Skin, hair, eyebrows, lips, and patterns on clothing were added in bright colours. Eyes were often inlaid using bone, crystal, or glass. Finally, additions in bronze might be added such as spears, swords, helmets, jewellery, and diadems, and some statues even had a small bronze disc (meniskoi) suspended over the head to prevent birds from defacing the figure.

The other favoured material in Greek sculpture was bronze. Unfortunately, this material was always in demand for re-use in later periods, whereas broken marble is not much use to anyone, and so marble sculpture has better survived for posterity. Consequently, the quantity of surviving examples of bronze sculpture (no more than twelve) is not perhaps indicative of the fact that more bronze sculpture may well have been produced than in marble and the quality of the few surviving bronzes demonstrates the excellence we have lost.

The early solid bronze sculptures made way for larger pieces with a non-bronze core which was sometimes removed to leave a hollow figure. The most common production of bronze statues used the lost-wax technique. This involved making a core almost the size of the desired figure (or body part if not creating a whole figure) which was then coated in wax and the details sculpted. The whole was then covered in clay fixed to the core at certain points using rods. The wax was then melted out and molten bronze poured into the space once occupied by the wax. When set, the clay was removed and the surface finished off by scraping, fine engraving and polishing. Sometimes copper or silver additions were used for lips, nipples and teeth. Eyes were inlaid as in marble sculpture.

Many statues are signed so that we know the names of the most successful artists who became famous in their own lifetimes. Naming a few, we may start with the most famous of all, Phidias, the artist who created the gigantic chryselephantine statues of Athena (c. 438 BCE) and Zeus (c. 456 BCE) which resided, respectively, in the Parthenon of Athens and the Temple of Zeus at Olympia. The latter sculpture was considered one of the seven wonders of the ancient world. Polykleitos, who besides creating great sculpture such as the Doryphoros (Spearbearer), also wrote a treatise, the Kanon, on techniques of sculpture where he emphasised the importance of correct proportion. Other important sculptors were Kresilas, who made the much copied portrait of Pericles (c. 425 BCE), Praxiteles, whose Aphrodite (c. 340 BCE) was the first full female nude, and Kallimachos, who is credited with creating the Corinthian capital and whose distinctive dancing figures were much copied in Roman times.

As you may have seen, sculptures derived from Ancient Greece include a lot of nudity. What these fig leaves do was that they covered parts of the body up so it wouldn't be disturbing for some viewers.

Was alot of sculptures placed on stands in ancient Greece? | Yahoo Answers

yep and they've been destroyed by vandals and other disasters throughout the years.

Geography (from Greek γεωγραφία, geographia, lit. "earth describe-write") is the science that studies the lands, the features, the inhabitants, and the phenomena of the Earth. A literal translation would be "to describe or write about the Earth". The first person to use the word "geography" was Eratosthenes (276-194 BC). Four historical...