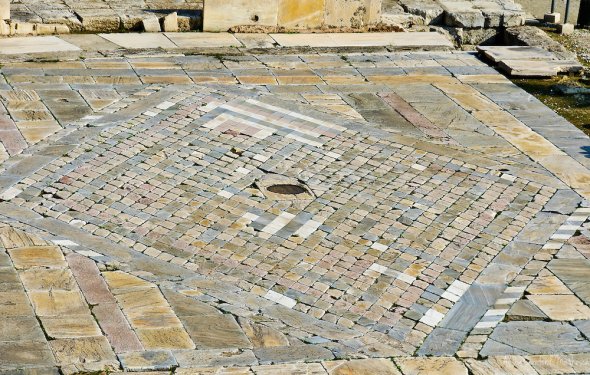 For the Greeks in ancient Athens, the Theatre of Dionysus was a very important part of their lives. Today it is considered to be the place where European theatre had its beginnings.

The best view you can have of the threatre is from the Acropolis.

So while you might be taken up with the all the sights of the Parthenon and other structures, tear yourself away and look down from the south-east side. You'll get a wonderful view of the Theatre of Dionysus.

You can also get good views from either side, on the hillside just above the upper rows of seating. Like all historical sites, taking a few minutes to sit down and reflect on the history is a great way to appreciate the achievements of the ancient Greeks.

Why is it so important?

The theatre was built at the time when 'drama' or 'theatre' was first being created. It's thought that the first drama was presented by Thespis in about 530 BC (which is where we get the word 'Thespian'). These dramas were probably performed in the Agora.

The cult of Dionysus was brought to Athens in the 6th C BC, and the threatre was built as part of the temple precinct.

In the 5th C BC major works of theatre were performed. These plays were written by some of the great "Attic tragedians", men such as Aeschylus, Sophocles and Euripides. The plays were performed as part of the cult celebrations of Dionysus. Fortunately, many of their plays have survived, which give us a unique insight into their thinking.

As with much of the ancient world, the site was added to and developed over the centuries. What remains today is mostly from the Roman era. Archaeologists have identified about nine different building phases.

In about 420 BC the temple to Dionysus was moved away from the theatre to make way for a hall which was built to the south of the theatre.

How do you know if an ancient threatre is Greek or Roman?

The 'orchestra' or central area is semi-circular in a Greek theatre, and 'D' shaped in a Roman one.

In 330 BC stone seats were added (some think there were wooden seats up until this time), and the remains of these are the ones you see today. It was able to seat up to 17, 000 people. The seats in the first row were reserved for dignitaries, and you can still see some of the reliefs.

The actual stage building was also developed over the centuries. Here you can see reliefs which show the legend of Dionysus. These are also from Roman times.

The Roman emperor Hadrian (who seems to pop up everywhere in the ancient world) had a special seat reserved at the Theatre of Dionysus just for himself. This is an indication of the high regard the Romans had for the ancient Greeks and their achievements.

The plays performed at the Threatre of Dionysus were not just for entertainment.

For a start, the playwrights competed for a prize. Then, you have to understand the ancient Greek attitude to life. They didn't separate their lives into compartments, as many do in our modern cultures. Their festivals were for enjoyment, worship, business, serious discussion, and much more.

Some of the plays performed were extremely rude (appealing to a male audience), while others tried to make comments or ask questions about serious issues of the day, or attitudes to the gods.

Paco de Lucía- Lycabettus Theatre - Athens Greece
Related Posts
Categories
Latest Stories
Average weather in Athens Greece Weather lowdown Although summer in Athens began in June, on average the...
Greece and Turkey Travel Travel on a Rick Steves tour through Greece or Turkey for the very best...
Hotels Resorts in Greece This stunning beach resort is situated in Crete on the Cretan sea. It is...
Island of Rhodes, Greece Loyalty to Sparta ended in 395 BCE when democracy was established on the...
Greece Ridge Center Mall Avis Location Information » 317 Greece Ridge Center Drive Location Contact...
Links How deep is eardrum q tips Why do the tips of my breasts hurt How to clean...
Interesting facts

Theatre (in American English usually theater) is a collaborative form of fine art that uses live performers to present the experience of a real or imagined event before a live audience in a specific place. The performers may communicate this experience to the audience through combinations of gesture, speech, song, music or dance. Elements of...

The National Theatre of Greece is based in Athens, Greece.
The theatre was originally founded in 1880 with a grant from King George I and Efstratios Rallis to give theatre a permanent home in Athens. The foundations for this new project were laid on Agiou Konstantinou Street and the building itself was designed by the famous Saxonian architect...