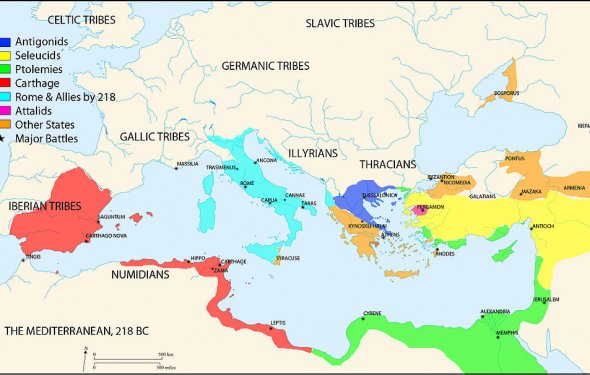 In many societies, ancient and modern, religion has performed a major role in their development, and the Roman Empire was no different. From the beginning Roman religion was polytheistic. From an initial array of gods and spirits, Rome added to this collection to include both Greek gods as well as a number of foreign cults. As the empire expanded, the Romans refrained from imposing their own religious beliefs upon those they conquered; however, this inclusion must not be misinterpreted as tolerance - this can be seen with their early reaction to the Jewish and Christian population. Eventually, all of their gods would be washed away, gradually replaced by Christianity, and in the eyes of some, this change brought about the decline of the western empire.

Early forms of the Roman religion were animistic in nature, believing that spirits inhabited everything around them, people included. The first citizens of Rome also believed they were watched over by the spirits of their ancestors. Initially, a Capitoline Triad (possibly derived from a Sabine influence) were added to these “spirits" - the new gods included Mars, the god of war and supposed father of Romulus and Remus (founders of Rome); Quirinus, the deified Romulus who watched over the people of Rome; and lastly, Jupiter, the supreme god. They, along with the spirits, were worshipped at a temple on Capitoline Hill. Later, due to the Etruscans, the triad would change to include Jupiter who remained the supreme god; Juno, his wife and sister; and Minerva, Jupiter’s daughter.

Due to the presence of Greek colonies on the Lower Peninsula, the Romans adopted many of the Greek gods as their own. Religion and myth became one. Under this Greek influence, the Roman gods became more anthropomorphic – with the human characteristics of jealousy, love, hate, etc. However, this transformation was not to the degree that existed in Greek mythology. In Rome individual expression of belief was unimportant, strict adherence to a rigid set of rituals was far more significant, thereby avoiding the hazards of religious zeal. Cities adopted their own patron deities and performed their own rituals. Temples honoring the gods would be built throughout the empire; however, these temples were considered the “home” of the god; worship occurred outside the temple. While this fusion of Roman and Greek deities influenced Rome in many ways, their religion remained practical.

Roman religion absorbed many of the gods and cults of conquered nations.

Even though there were four colleges for priests, there was no priestly class; it would always remain a public office. This practice would even extend to the imperial palace. From the time of Emperor Augustus the emperor would assume the title of pontifex maximus or chief priest. Other than the pontifexes there were augures, individuals who read the entrails of animals and the flight of birds to interpret omens, or in other words, the will of the gods. Elaborate rituals were performed to bring Roman victory in battle, and no declaration of war or major event was undertaken without the clear approval of the gods. Dating from the time of the Etruscans, a diviner or haruspices, was always consulted, and it was considered dangerous to ignore the omens. Spurinna, a Roman soothsayer, read animal entrails and foresaw Julius Caesar’s death on the Ides of March. When Roman Commander Publius Claudius Pulcher ignored the omens - refusal of the sacred chickens to eat - before a battle during the First Punic War, he was defeated, as was his military career.

As the empire expanded across the Balkans, Asia Minor and into Egypt, Roman religion absorbed many of the gods and cults of conquered nations, but the primary influence would always remain Greece. With only a few exceptions, most of the Roman gods had their Greek counterparts. This Roman mythology would have a significant influence on the empire - politically and socially - as well as on the future of western civilization. One needs only to look at the names of the days and months (Tuesday, Saturday, January and June), the languages of European nations, and the names of the planets (Mars, Jupiter, Saturn, and Pluto) to realize this influence.

Contributions of Ancient Greece and Rome

The bible has it all! Ask your teach if you can just read a few of the "books" Genisis - for example

What is the culture of ancient Greece and rome?

Because the culture is a blend or a mix, it is referred to as Greco-Roman culture. It is a culture based upon individual rights and a general collective conduct that served to insure public safety.

The intended meaning of the term civil religion often varies according to whether one is a sociologist of religion or a professional political commentator. The following discussion includes both perspectives followed by a brief history of the concept.
Within the contexts of the monotheistic, prophetic, revealed faiths, civil religion can be...